Ross Rennie is set to miss the remainder of the autumn series after dislocating his shoulder in yesterday's 51-22 defeat to New Zealand. [more] 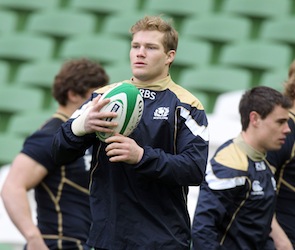 Ross Rennie is set to miss the remainder of the autumn series after dislocating his shoulder in yesterday’s 51-22 defeat to New Zealand.

The 26-year-old, who was making his 20th appearance for Scotland, has been tipped for a place on next year’s Lions tour to Australia.

But he was dealt a major blow after suffering the series ending injury in the first half of the loss at Murrayfield.

The Edinburgh flanker was greatly missed by Andy Robinson’s men, who thereafter lacked a genuine openside to tackle Richie McCaw at the breakdown.

Glasgow Warriors duo Rob Harley and Chris Fusaro are the frontrunners to take Rennie’s place in the Scots’ squad.

"He has been reviewed today at Spire Murrayfield Hospital and will now be in the care of shoulder specialist Miss Julie McBirnie for further assessment, which will give us a better indication of his rehabilitation schedule.”

Scotland are also sweating on the fitness of several other stars who were left licking their wounds following the heavy defeat.

“In addition to Ross’s injury there is the usual array of assorted soft tissue disruption associated with Test match rugby of yesterday’s intensity," added Robson.

“As ever, 48 hours post a match of such physicality will give us a better indication of how players are recovering.”