Ireland have received an injury set-back after it was confirmed Lions duo Paul O'Connell and Stephen Ferris are unlikely to face Argentina. [more] 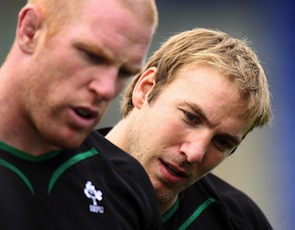 Ireland have received an injury set-back after it was confirmed Lions duo Paul O’Connell and Stephen Ferris are unlikely to face Argentina.

"It's a question, I think, of just monitoring it as we go along and see where it ends up. There's no fixed date or estimate as to when he actually will return to play.

“It is out there in the public domain that he's had a couple of (anti-inflammatory) injections. He had a further injection on Friday.

"It will be managed for the next while and the hope is that it can settle down over the next few weeks. Certainly the nature of the injury means that it's a question of wait and see.

“It certainly isn't a black and white situation in terms of knowing the exact prognosis for what you do from this moment on."

Ferris is also set to miss the November 24 clash as he continues his rehabilitation from an ankle injury.

"He has significant ankle ligament damage and is continuing to receive intensive treatment," added Kearney.

"But at this stage, we don't expect him to be available for the game against Argentina on Saturday week."

Ireland are also sweating on the fitness of Eoin Reddan. The scrum-half injured his ankle against the Springboks and has been ruled out of this weekend’s clash with Fiji but it is hoped he will return to fitness to face the Pumas.