Scotland skipper Kelly Brown is seeking an 80 minute performance from his side when they face South Africa on Saturday. [more] 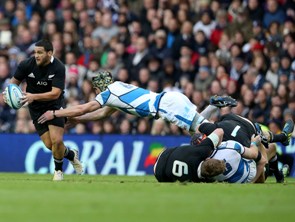 Scotland skipper Kelly Brown is seeking an 80 minute performance from his side when they face South Africa on Saturday.

Brown’s troops produced some impressive rugby in last week’s clash with the All Blacks but were ultimately beaten 51-22 as they failed to reach the required standards for the entirety of their autumn opener.

Scotland scored three tries to show exactly what they are capable of at Murrayfield but they shipped seven themselves to remind Brown just how much defensive improvement will have to be made against a Springbok side looking to avenge a shock defeat the last time the two teams met in Edinburgh.

"In patches we played well but as soon as we switched off and sat off them they made us pay," said Brown, who won his 50th cap at the weekend.

"For us, looking forward, we've learned our lessons and we know that we need to be consistent for the full 80 minutes.

"We've got our defensive structure and it's just a case of applying it better than we did last Sunday. We're looking to deliver a really strong defensive performance on Saturday.

"The fact that we won last time against South Africa, they'll be looking for a bit of payback I'm sure.

"It's a case of mixing things up, not letting the side we're playing against settle and really attempting to put them under as much pressure as we possibly can.

"It's up to us to make sure we nail a really high level of performance, make it happen and do the nation proud."

Head coach Andy Robinson has been forced into a late reshuffle after Brown’s back-row colleague Alasdair Strokosch was ruled out with a calf injury.

The Perpignan flanker is replaced in the starting line up by Glasgow’s John Barclay, with Brown switching to the No6 shirt to allow Barclay to play openside.

Edinburghyoungster Stuart McInally is now in line to make his international bow from the bench.

“Alasdair suffered a minor calf strain in training this week and, while we were hopeful it would settle in time, we believe his recovery has not been sufficient to warrant risking a partially fit player,” said Scotland and Lions doctor, James Robson.