The Wallabies have called up Scott Higginbotham for the remainder of their European tour. [more] 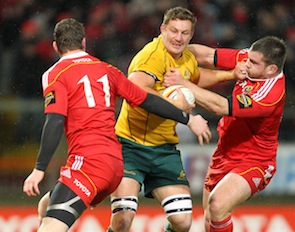 The Wallabies have called up Scott Higginbotham for the remainder of their European tour.

The combative back rower is flying out to join the rest of Robbie Deans’ squad after Kane Douglas and Rob Simmons were hit by injury and suspension respectively.

Douglas suffered a knee injury against the French and Simmons was handed an eight-week ban for a tip tackle on Yannick Nyanga during the 33-6 defeat in Paris.

Higginbotham might be a blindside flanker rather than a second row but his selection is no surprise given the role he has played for his country this season.

The 26-year-old started all four summer Tests against Scotland and Wales and the first two Rugby Championship fixtures against the All Blacks.

He was on the bench for three of the four remaining tournament fixtures after a back injury ruled him out of the defeat in South Africa and Deans then recalled him to the starting lineup for the trans-Tasman clash with the All Blacks in Brisbane on October 20.

It was his actions in that fixture that cost him his place in the original touring party after he inexcusably struck Richie McCaw with his knee and his head.

Higginbotham was banned for two matches as a result, counting him out of the games in Paris and London and ultimately prompting Deans to leave him at home.

The new Melbourne Rebels signing spoke candidly of his ‘double punishment’ at the time but will now have the chance to redeem himself against Italy and Wales on November 24 and December 1.

Higginbotham is due to arrive in London on Sunday before the squad fly out to Florence to face the Azzuri in their third tour match and their penultimate scheduled Test before the Lions head Down Under next summer.

Douglas has not yet been ruled out of the tour but he remains a major doubt for games three and four having been unavailable for the clash with England. He will be assessed further this week before a decision is made on whether he remains with the party.