Scotland centre Joe Ansbro insists he has 'dodged a bullet' even though he has no idea when he will return from a broken neck. [more] 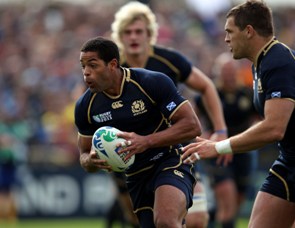 Scotland centre Joe Ansbro insists he has ‘dodged a bullet’ even though he has no idea when he will return from a broken neck.

The London Irish star suffered the setback in a pre-season club game against Munster in August and the injury has effectively ended his hopes of pushing for a Lions place next summer.

Ansbro, who is equally at home on the wing as well as in midfield, suffered a triple fracture of the C1 vertebrae in a collision that could have left him with permanent damage.

Despite the seriousness of the injury, the 27-year-old admits things could have been far worse than they are and he remains thankful for the manner in which his recovery has progressed so far.

"Initially you are frustrated and confused but the more you think about it the more you realise you’ve dodged a bullet," said Ansbro.

"It was a big shock for my family but at the same time I was very lucky with the outcome. I didn’t lose any sensation to my arms or neck, so I was very fortunate. I’m walking around and I’m confident that my recovery’s going well.

"I couldn't move very well, so we decided to go for the halo brace. I thought that would help but initially it was a bit of a nightmare.

"That extra weight and having four screws inserted into your skull was hard. I still really couldn't move and do basic things and two or three days in hospital like that I started to get quite anxious.

"It’s a tough career because you do build momentum and then suddenly the rug is pulled out from underneath you and you have to start again.

"I’m missing out on playing for the club that has backed me the whole way and then there’s the ultimate honour of playing for Scotland. I’m missing all that and that’s tough.

"I’d had a bit of a good run just before I did it as well, with the summer tour and a couple of good pre-season games. It’s just very frustrating as you think about what could have been – that’s what motivates you to keep rehabbing."

Ansbro has no intentions of calling time on his rugby career just yet but he remains in the dark as to whether and when he will be able to play again.

No date for a return to training has been set and no plan has been laid about how best to approach a possible comeback.

"There is still no confirmation on that," added Ansbro when asked if he be able to return to the game.

"I’ve got a scan to come in a couple of months and I've got a few more stages of rehab to go.

"I need to get back out there and run around with a ball and only then can I make a proper decision.

"The first couple of weeks, the majority of my family said do not play rugby again. But then my older sister did a flip chart of my road to recovery and she thought it was despicable, the prospect of me not playing again.