Rob Howley is hoping the immense pride of being asked to join Warren Gatland's Lions coaching team is bettered by series success next summer. [more] 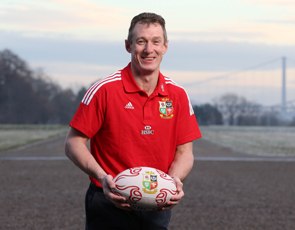 Rob Howley is hoping the immense pride of being asked to join Warren Gatland’s Lions coaching team is bettered by series success next summer.

Howley will head Down Under as an assistant coach for the class of 2013 having fulfilled the same role on the last Lions adventure to South Africa three years ago.

Sir Ian McGeechan’s men suffered an agonising series defeat to the Springboks in 2009, losing the first and second Tests in heartbreaking circumstances before hitting back to record a record-equalling triumph in the third and final encounter in Johannesburg.

It was the second time the former Wales scrum-half had seen a southern hemisphere giant narrowly edge past the Lions, with Howley having been a Test starter when the Lions faced the Wallabies in 2001, four years after his debut tour was ended prematurely by a shoulder injury prior to the first international.

But now he has been handed another chance to taste the ultimate glory with Britain and Ireland’s elite and he can’t wait to get going.

“This means everything to me. I was involved with the Lions as a player back in 1997 and 2001 and I had a great experience in 2009 with Ian McGeechan and I’m grateful to be given another opportunity,” said Howley.

“The goal is to emulate 1989 and 1997. Whilst winning that last Test out in South Africa in 2009 was obviously pleasing, the ultimate is to win a Test series. Hopefully that will come in 2013.

“Defeat in the second Test in South Africa three years ago was hard to take and I’m so glad I’ve got another opportunity. That feeling at Loftus was a feeling that I never want to experience again.

“The win in the third Test put the Lions on the front foot. It was huge to beat South Africa in that last Test and that’s where we’ll want to start when we get together in May.

“I’ll never forget my experience of running out in 2001 at The Gabba and seeing a sea of red and Martin Johnson coming back in to the changing room and saying we’re not going to let those guys down today. And we didn’t, but unfortunately we let them down in the series. We were too good to lose that series but it’s another one that got away.

“We need to win this series and I’m sure the coaches and the players will do everything they can to make sure we come back from Australia with that series win.”

Rowntree, Howley, Gatland and Farrell will work together for the Lions

Having been involved with two tours as a player and one as a coach already, Howley could be forgiven for being a little blasé about his latest involvement, yet nothing could be further from the truth when it comes to his attitude to his selection.

The 42-year-old still feels the same sense of privilege to be involved with Britain and Ireland’s elite today as he did 15 years ago and that should rub off on the players when they eventually get together in May.

“Just being involved as a Lion is the ultimate. It’s the best of the best,” added Howley, who hopes the fact that he, Gatland and Graham Rowntree worked together four years ago will be a major plus when they look to topple the Wallabies next summer.

“The experiences you have as a Lions player and as a Lions coach are magical experiences. It’s the pinnacle of your career, whether you’re a player or a coach. Your time as a Lion goes very quickly and you have to enjoy every minute.

“It’s the only time you’ll play alongside those players, be coached by those coaches or coach those players. The legacy of the Lions goes back many, many years and that will continue long into the future.

“Continuity is important with the Lions. You have such limited preparation time so you can’t change too much, but you don’t need to because you’ve got talented players. You want the players to go out and play what’s in front of them. That was what was great about 2009, the players were just allowed to go out and play.

“I’ve got a very good relationship with Warren. We share the same sort of philosophy of the game and how we want the game to be played and hopefully that’s one of the reasons why I’ve been selected to be part of the Lions in 2013.”

Fellow Lions coach Rowntree admits he and the Lions have unfinished business from their last adventure together.

Rowntree was a specialist scrum coach when Britain and Ireland’s elite toured South Africa four years ago and will now take on more responsibility for the trip to Australia next summer.

The Lions haven’t tasted series success since Rowntree’s first tour as a player back in 1997 but he insists the manner in which they were beaten by the Boks in 2009 will drive them on to greater things this time around.

“That second Test, the emotions of that game will live with me forever. We did a job in terms of the first half as a forward pack and then we lost Gethin Jenkins and Adam Jones and that changed everything.

“It was going to be a famous victory. We were winning until the last few minutes in Pretoria and we had it taken away from us.

“It’s the first time I’d seen grown men cry in the changing room after the game. It was a massive roller coaster and there’s definitely unfinished business.

“We’re due a series win aren’t we? Where we are now, with the players we can pick, and the continuity that we’re able to bring in terms of the coaching plus the injection of people like Faz (Andy Farrell) with that passion and energy, I think now is the time. Now is the time to win a Test series.”

Graham Rowntree wants a series win in Australia next summer

Rowntree was heavily tipped to join Gatland on a second tour as a coach and a fourth in all after making a big impression in ‘09 yet the ex-England and Leicester prop says it was still a surprise and a pleasure to be selected once more.

And while his work coaching his country has clearly taken centre stage in the three-and-a-half years that have followed the tour of South Africa, his passion for the red jersey and the desire be involved again hasn’t diminished.

“Just talking about it all now is making the hairs on the back of my neck stand up,” added Rowntree.

“I was thoroughly delighted to get the call from Gats and I’m really looking forward to it. It’s a special time a Lions tour and it’s a special country we’re visiting as well. And having just faced Australia in the autumn series, we all owe them one.

“I learnt a lot from Warren in 2009 and I’ve kept in touch with him since. I like to think of him as a mentor.

“There’s a massive consistency there on the coaching staff. I’ve kept in touch with those guys, just picking their brains on things – not sharing too many secrets about England and Wales, obviously, but we understand how one another operates.

“You move on very quickly and we’ve had a lot of things going on on the domestic front with England, but the Lions is always at the back of your mind.