Impossible to turn down says BOD

Former Lions skipper Brian O'Driscoll says it would be impossible to turn down the chance to lead Britain and Ireland's elite again next summer. [more] 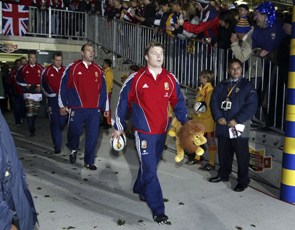 Former Lions skipper Brian O’Driscoll says it would be impossible to turn down the chance to lead Britain and Ireland’s elite again next summer.

O’Driscoll captained the Lions on their ill-fated tour of New Zealand seven years ago but his adventure was ended prematurely courtesy of the shoulder injury he suffered within the first few minutes of the opening Test.

He toured South Africa in 2009 as a senior player but not as skipper after being overlooked in favour of countryman Paul O’Connell, yet talk is already turning to the 33-year-old becoming just the second man behind Martin Johnson to lead the Lions on more than one tour.

And while O’Driscoll claims he isn’t paying too much attention to those tipping him to make history, he does admit it would be an honour he simply couldn’t refuse.

"It would be impossible to turn down the opportunity if I was asked to be captain again, even though there are huge stresses that go with it," O’Driscoll told the Daily Telegraph.

"So many names are being bandied around at the moment that I genuinely don't take much heed.

"Your captain needs to be starting in the Test team, and it is difficult to say at this stage that there is anyone in Britain and Ireland who is guaranteed to be starting.

"Having been captain on a tour then toured when I'm not captain, I can tell you it is very different.

"There is a lot of pressure as the Lions skipper. It was a lot more relaxing just being another player in South Africa. I was able to enjoy it and there was less scrutiny than there had been in New Zealand."

If O’Driscoll does make a fourth tour in 2013 but doesn’t get the nod for the captaincy from head coach Warren Gatland, he’ll still have a vital role to play behind the scenes given his vast experience in the famous red jersey.

"Paul did a good job in 2009, but we fell short as a team. Whoever does the job this time has to use the leadership group around him," added O’Driscoll.

"There will be some guys who have been on previous tours and it is important to get them working for the captain.

"The key is that there is a tight-knit squad with a common goal, whatever the individual highs and lows along the way."