Farrell has always been a fan

Andy Farrell's connection with the Lions goes back far, far further than his recent selection as part of next summer's coaching staff. [more] 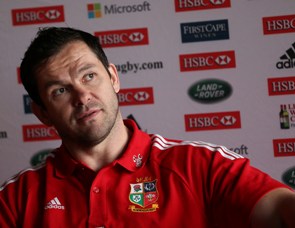 Andy Farrell’s connection with the Lions goes back far, far further than his recent selection as part of next summer’s coaching staff.

Farrell may be relatively new to full-time coaching and indeed to rugby union as a whole, but the former league star insists his background in the 13-man version of the sport didn’t prevent him loving the Lions as a youngster.

The ex-Wigan and Great Britain star was a huge fan of the Living with the Lions documentary that detailed the highs and lows of the 1997 Lions tour of South Africa and he admits he has long been keen to emulate fellow league legends like Scott Gibbs and John Bentley in representing union’s cream of the crop.

“It’s something that I hoped to be involved with as a player. Things didn’t work out there, but to have an opportunity as a coach is just as special for me,” said Farrell, who didn’t make his union bow until after the 2005 Lions returned from New Zealand and was forced to retire before the 2009 trip to South Africa.

“I’m very proud, privileged and honoured to be involved with such a special team. Even when you’re on the outside, you’ve always been connected, because of the excitement and the emotion that it brings.

“Even back in the day as a kid, just watching the old videos and games on previous tours and everything that it brings with it, was something I looked forward to. It’s like the Olympics coming round every four years and it’s like the World Cup – everyone knows about the Lions and it’s a massive occasion.

“I’ve watched those Living with the Lions videos more than any other videos I’ve ever had. You’re always intrigued as to what’s going on behind the scenes, especially as a kid.

“They were the first fly-on-the-wall documentaries where you could really see how the professionals were doing things. You always wanted to know how the players at the top functioned, how the coaches speak and how they all handle the expectation of four nations coming together.

“Scott Gibbs was the standout for me in 1997 and I’ve been fortunate enough to have played against him. Then there were players like John Bentley and Scott Quinnell, all guys that I’ve played with or against, and to see what it meant to them sticks out in my mind. The Lions is a special moment in sport, not just in rugby.”

Farrell’s rise to the top of the union coaching tree has been a remarkable one.

The 37-year-old hadn’t even begun his coaching career when the last lost of Lions were on tour. He only stepped up to first-team coach at Saracens at the end of 2010 and didn’t start working with the England senior side until December of last year.

But despite his lack of a lengthy CV in coaching terms at Test level, Farrell has already shown plenty of the qualities needed to succeed with the Lions.

He comes with glowing references from those that have worked with him on both the domestic and international front and fellow England and Lions coach Graham Rowntree is a huge fan of his infectious enthusiasm and his man-management skills.

As for the man himself, Farrell admits it’s been an incredible progression in such a short space of time but he believes the experiences he has had have all developed a coaching style that could suit the unique demands of a quick-fire tour Down Under next summer.

“It’s been a hell of a year so far – it’s unbelievable. I feel very fortunate to have an opportunity like this so early in my coaching career,” added Farrell.

“I’ve never been one to look too far into the future: what I’m doing today is important and what I’m going to do tomorrow is equally as important and that’s as far as I go, really. It’s a matter of trying to better yourself everyday and try to improve the people that you’re coaching.

“The difference of coaching international football to club football is that you’re bringing everyone from different teams, different patterns and different cultures together as a group as quickly as possible. I’ve been fortunate that I’ve been involved in quite a few of those in such a short space of time.

“When I first started coaching, Saracens got rid of 14 and brought 14 more in. We had to gel those together as soon as we possibly could and we were quite successful with that.

“Then Stuart (Lancaster) asked me to come along and do the Saxons with him and the Saxons is like proper international football. You get some people who are not happy to be there because they feel they should be in the senior squad and then you get young guys who are super keen and you’ve got to gel them all together.

“Then we had the interim job with England and the new group that was brought together again. So I’ve had quite a lot of experiences of bringing teams together and that’s the biggest challenge of the Lions gig – bringing world-class players together as soon as possible, getting the camaraderie etc right from day one and trying to get everyone on the same page.”