JJ wings in for new honour

Former Llanelli, Wales and British & Irish Lions wing JJ Williams has been awarded an MBE in the New Year Honours list for his services in rugby and charity. [more] 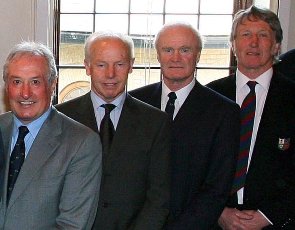 Former Llanelli, Wales and British & Irish Lions wing JJ Williams has been awarded an MBE in the New Year Honours list for his services in rugby and charity.

The 64-year-old Williams, who won two Grand Slams during his 30 cap career with Wales between 1973 and 1979, went on two Lions tours. He played in all four tests in South Africa in 1974 and in three more internationals in New Zealand in 1977.

The other major highlight of his rugby career was being in the Llanelli side that beat the 1972 All Blacks 9-3 at Stradey Park.

"Receiving the MBE is right up there with all the things I achieved during my playing career. It is very special and I was tremendously excited when I found out I would receive the honour,” admitted Williams.

"A lot of the players I played with in the 1970s received honours at the time and I thought maybe my chance had gone. But to have received this honour later in my life means I will cherish it that little bit more and it is very, very special for me and my family."

One of the founders of the Welsh Rugby International Players Benevolent Association, which offers assistance to players who have struggled after their playing careers finished, Williams has helped to raise tens of thousands of pounds for the organisation.

"I am particularly pleased that the charity work I have done is also a part of this, and I hope it has played a big part in it because it is something that is very important to me. The setting up of the Welsh Rugby International Players Benevolent Association has helped a lot of players who have suffered illness or injury in later life,” added Williams.

“It’s help that was needed as it was an amateur game when they played. I enjoy my charity work, I was fortunate to be given a good life through sport and I think it is right to give something back."