Having begun supporting the British & Irish Lions as a schoolboy and started his broadcasting career on the Australia tour in 2001, the team occupies a special place in Alex Payne's heart. [more] 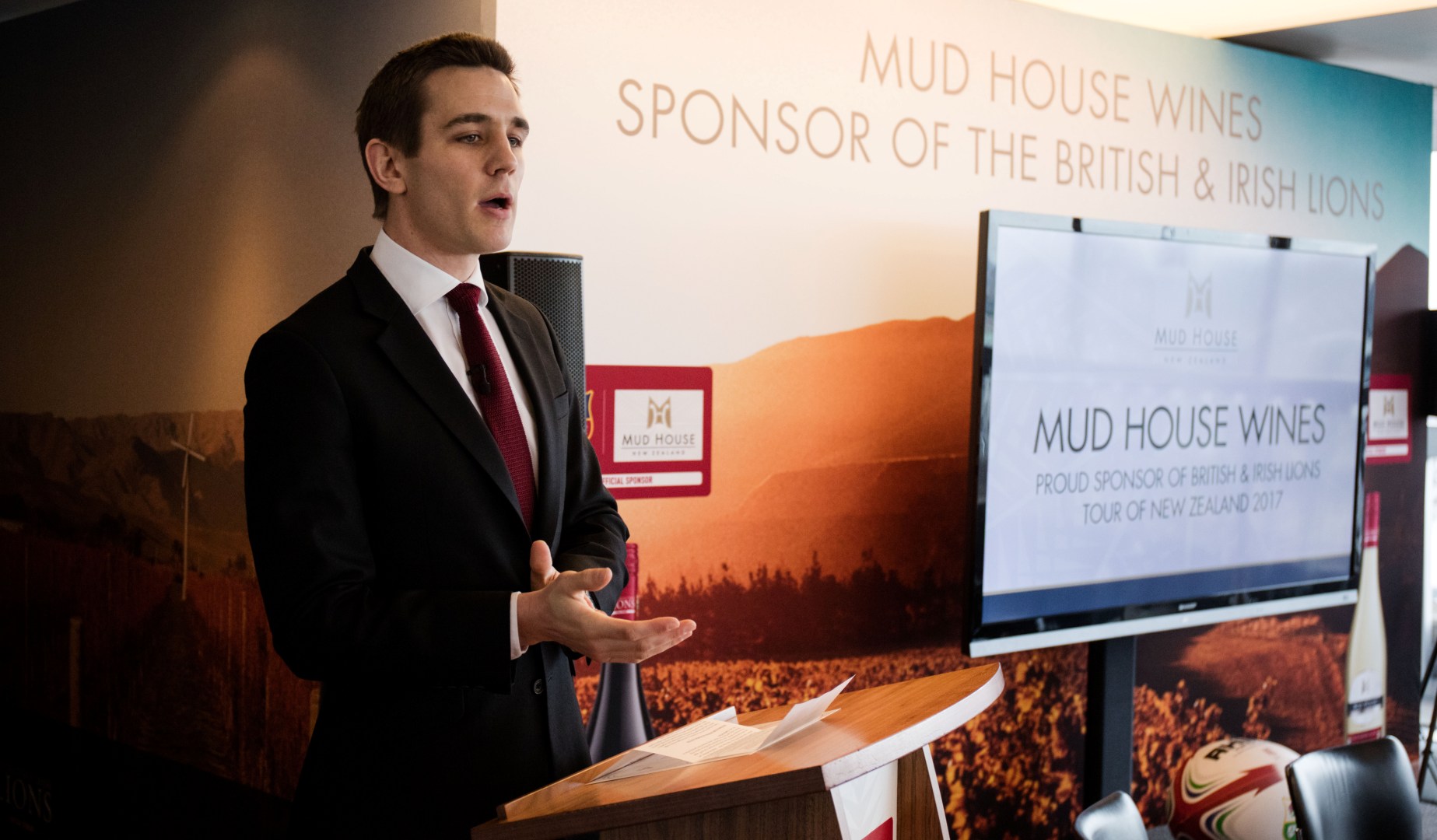 Having begun supporting the British & Irish Lions as a schoolboy and started his broadcasting career on the Australia tour in 2001, the team occupies a special place in Alex Payne’s heart.

Payne presented the 2013 Tour of Australia for Sky Sports, but his relationship with the team goes back to the the tours of the 1990s, including the iconic series win over the then World Champion South Africans in 1997.

The MC for the day at the announcement of Mud House Wines as an official sponsor of the 2017 Tour of New Zealand, has been following the team since childhood.

Having been a schoolboy supporter in 1997, the first tour covered in full by Sky Sports, Payne and three university mates followed the 2001 tour in a banged-up car while putting in shifts for Sky at the weekends.

"I ended up at The Gabba in 2001 sitting at the end of the Lions bench just on work experience, which as a 21-year-old and someone who had a huge love for not only rugby but for the Lions, was the most exciting thing I’d ever done.

"It was the game that Brian O’Driscoll, Jason Robinson, Dafydd James and Scott Quinnell all scored tries – it was absolutely unbelievable. Not only is it my greatest rugby memory but it was the moment I realised that I wanted to be a broadcaster."

Payne was also there in 2005 and 2009, working as a reporter and highlights presenter. But it was 2013 – when Sky covered the historic Lions series victory – that Payne really cherishes. "My wife wouldn’t thank me for this but I would honestly say that the 2013 tour to Australia was one of the greatest things I’ve ever done in my life because it was just such an exciting event and Australia were such a welcoming country to go to," he said.

"I will never forget the pressure I felt before that first Test in 2013 – it was by far the biggest thing that I’ve done as a broadcaster, but it was such a great occasion and event to work on.

"Particularly at Sky, we have to be very impartial, although it’s obvious that I’m an Englishman and I like them to win, but in terms of editorial I like to try and be as balanced as possible.

"The Lions is the one thing where you can probably just stand on the right side of the fence because we are broadcasting back home and is a slightly different dynamic."

Having had that perfect rugby experience in 2013, Payne is already looking forward to the next event.

"I can’t believe that we are 15 months away from it all getting under way again, it seems like just yesterday that Jamie Roberts crashed through to score that final try and the Lions lifted the trophy in Australia.

"I do feel that there is something very unique about the British & Irish Lions, not just in rugby but in sport. There aren’t many other occasions where you bring together four different countries – they knock lumps out of each other in February and March, and then in May they come together as a team.

"I love the romance, history and everything the Lions stands for."

Having come close in 2009 and before winning the series in 2013, and in both cases getting the balance right and embracing the chance to experience everything the host country has to offer, Payne feels the Lions are well set for a successful trip to New Zealand in 2017.

"In 2017, they’ve got to go as one and be united as a squad and stick together when it gets tough, but they’ve also got to embrace New Zealand,.

"I genuinely think they’ve got a chance because all the change New Zealand are going through and the core number of players who won in 2013 – four years comes around very quickly. But I think the 2017 crew will have a much better chance than those in 2005."