Forwards win matches, backs decide by how much and it's the fly-half who gets the credit or the blame. [more] 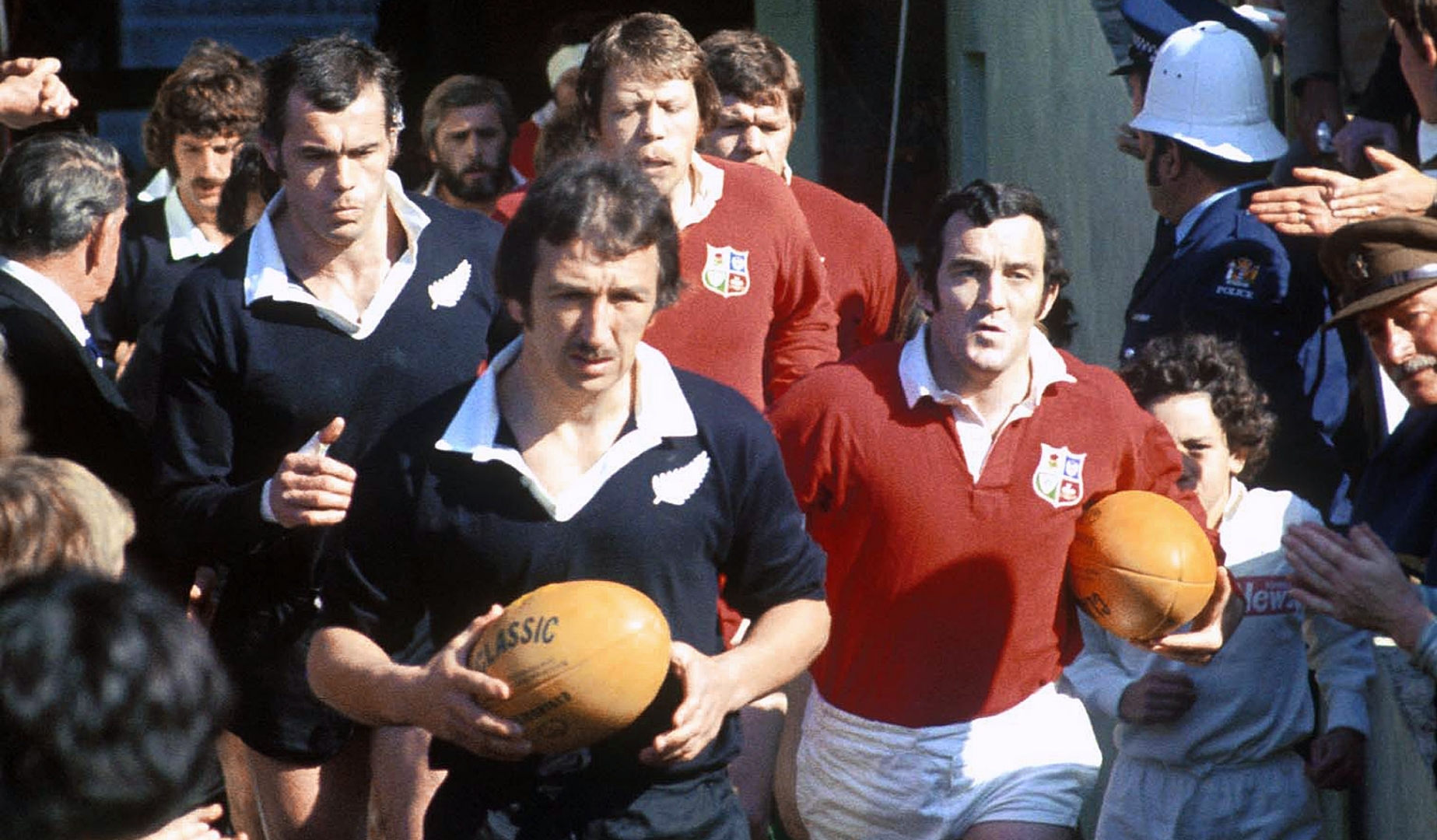 Forwards win matches, backs decide by how much and it’s the fly-half who gets the credit or the blame.

When it comes to The British & Irish Lions it’s most often been the former with a succession of legendary fly-halves from all four nations.

Whether it was Cliff Morgan wowing the South Africans in 1955, Barry John bedazzling New Zealand in 1971 or Gregor Townsend ensuring Sir Ian McGeechan’s gamble paid off in 1997, fly-halves are indelibly linked to the Lions history.

It’s no secret as to why the No 10 jersey has so much importance – these are the men charged with pulling the strings and unleashing the attacking weapons out wide.

More often than not, they also have to kick the points, and for a forward pack the game plan always starts with knocking the opposition fly-half off his stride.

The role of the fly-half is one that has changed dramatically in some ways and stayed the same in others.

On early Lions Tours the likes of Welshman Percy Bush, one of three hat-trick scorers in a Lions ten jersey, showed the sort of pace and eye for a gap that John would emulate more than 60 years later.

In 1910 Cherry Pillman pulled on the No 10 jersey despite being a back rower by trade, but those early fly-halves were certainly smaller than their modern day equivalents.

Irishman George Cromey, who toured South Africa in 1938, was the shortest of them all at just 1m64 some 24cm shorter than Jonny Sexton and Owen Farrell in 2013.

That’s because the role of the fly-half in defence is one that has been transformed during professionalism.

As Phil Bennett, scorer of 208 points in the Lions ten jersey – more than anyone in history – explains,  the advent of professional forwards has changed the game forever for the fly-half.

Bennett puts it: “There’s so little space nowadays, when I played all the forwards just got stuck into each other, belting hell out of each other. You never saw forwards out in the backs. If they were out in the backs you were regarded as a bit of a softie.

“In the modern game, you see Dane Coles the New Zealand hooker, who is out on the wing, he’s selling dummies and he’s as quick as a lot of wingers. That’s how dramatically the game has changed.

“But also you have to say, everyone has different strengths and maybe the odd weakness. There’s nobody quite the same.”

One of the most gifted pre-war runners of them all, Percy Bush was a star of the 1904 Tour to Australia and New Zealand.

The Cardiff fly-half scored tries in each of the first two Tests against the Wallabies and played all four Tests on the Tour.

Wales have had a long history of great fly-halves, with Bush one of the earliest exponents.

Something of a maverick, few could predict what his next move would be, and that unpredictability made him compelling to watch.

With more than 100 points on his lone Lions Tour, Bush earned the nickname ‘Will of the Wisp’ from the Australian press.

Named by the IRFU as the greatest-ever Irish rugby player in 2002, Jack Kyle was the architect of Ireland’s first Grand Slam in 1948.

Two years later he starred for the Lions on their Tour to Australia and New Zealand, scoring seven tries in 20 appearances.

A gifted running fly-half, Kyle was exceptionally elusive with ball in hand and had arguably his best performance on that Tour in the drawn first Test, scoring one try and creating another in the 9-9 draw.

He also scored a hat-trick on that Tour, against West Coast, joining Bush and Gordon Waddell as the only fly-halves to have done so for the Lions.

Every Lions Tour is special, but the 1955 visit to South Africa will live long in the memory as one of the greatest of them all.

It was there that Cliff Morgan cemented his place in the pantheon of great Lions fly-halves, and growing up Bennett saw first-hand and heard all about the great Morgan.

He recalls: “Cliff Morgan was a great player, and I use the word great. I watched him as a young boy, he was a wonderful Welsh outside half.

“I was very young going to Stradey Park and watching Cliff playing for Cardiff when they came to play Llanelli.

“Seeing Cliff play for Cardiff, he was just outstanding. Going to South Africa and when you talked about Cliff Morgan, he was part of one of the greatest Lions teams in 1955.

“I asked the South Africans were they a great side and they would say they were great and Cliff Morgan was special. He was a truly remarkable player. It made you very proud as a Welshman.

“When I went back in 1974 I was inspired by the stories of the great Cliff Morgan. I knew him as a friend later on in life. He was an outstanding man.”

You don’t earn a nickname like the King without being a special talent, and Barry John most certainly was.

He will always be remembered by New Zealand fans as the man who downed the All Blacks in 1971, three years after injury had cut short his first Lions experience.

Bennett’s immediate predecessor, the pair were both geniuses although in very different ways, as the latter remembers.

“Barry was born five miles up the road. My son lives in that village, opposite the house where Carwyn James used to live,” he said.

“So I grew up with these people. Barry was with Llanelli before he went to Cardiff. I played against him as a very young man, about 17 or 18.

“He was completely different to me. People would perhaps say I took more chances. Barry was a glider, he ran quite beautifully. You admire him.

“I had many great battles with Barry in Llanelli versus Cardiff which used to be played in front of packed houses.

"I also played three or four times in the Welsh team with him, either on the wing, at full-back or in the centres.

"Then he retired and I took over. We had different styles, different attitudes. He was laid back, I was a bit more focused whereas he could stroll through a game.”

After John in 1971, the Lions were lucky enough to have another legendary Welsh fly-half in their ranks three years later in South Africa.

Possessed with an iconic sidestep, Bennett left defenders trailing in his wake, and arguably the abiding memory of him in a Lions jersey was in the second Test in South Africa in 1974 when he scored a magnificent solo try in Pretoria.

Three years later he was named captain in New Zealand and even over that short period, he admits the role of fly-half had changed.

“Each Tour differs depending on what the management want, what sort of style they wanted to play," he added.

"In the heat of South Africa with the sun scorching and playing at altitude, the forwards don’t want you running the ball crazily all over the place, with a captain like Willie John McBride, who believed in dominance up front, he wanted the ball put in front of him so his forwards could dominate the game, rather than running wildly and using up energy.

“It differed greatly to New Zealand when I went in 77, it was very wet and very muddy. We wanted to play a bit of open rugby but the conditions meant that we couldn’t at times.”

One of the greatest Scottish backs of them all, Gregor Townsend travelled to South Africa in 1997 having played a lot of his recent Test rugby in the centres.

Yet up against the world champion Springboks, Sir Ian McGeechan and Jim Telfer placed their faith in Townsend at fly-half.

Without the burden of kicking duties, looked after by Neil Jenkins at full-back, Townsend’s selection was a strong signal from the Lions about how they wanted to play.

Against an excellent defensive side, Townsend was tasked with ensuring the Lions attack got the upper hand. It did just that in the first two Tests, as the men in red claimed a 2-1 series victory.

England’s greatest fly-half, and the man who kicked them to World Cup glory in 2003 in Sydney.

Jonny Wilkinson was one of the first great defensive fly-halves, putting his body on the line over and over.

Twice selected by the Lions, six of Wilkinson’s nine Lions appearances came in Test matches, facing Australia, New Zealand and Argentina, scoring a Lions record of six penalties against the latter in Cardiff.

Unerring from the kicking tee, Wilkinson was also a skilled distributor, making his mark on successive Tours Down Under.