It's been a season marked by tragedy for Munster after the sad passing of Anthony Foley, but the province have responded by paying the perfect tribute to their legendary skipper. [more] 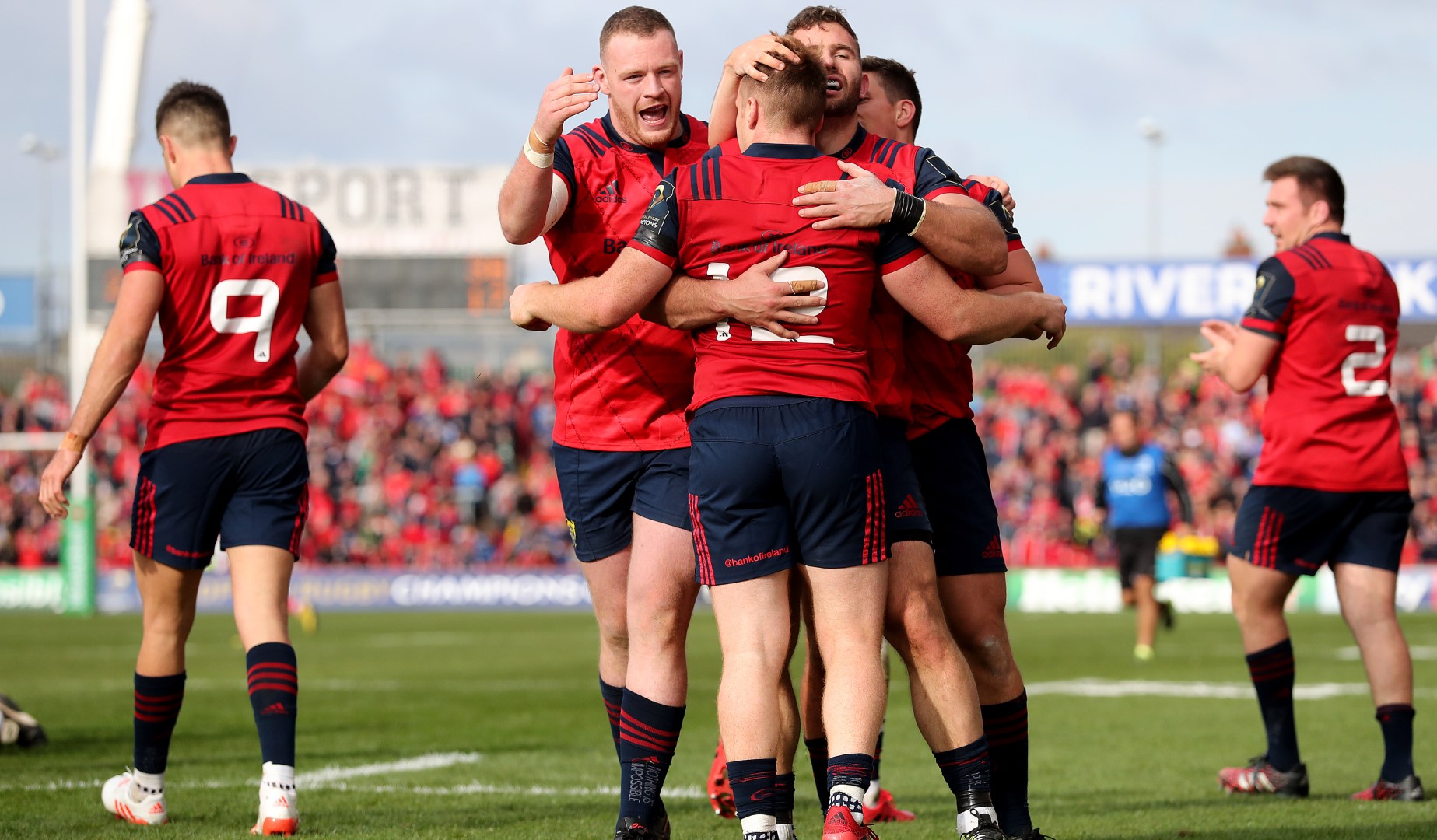 It’s been a season marked by tragedy for Munster after the sad passing of Anthony Foley, but the province have responded by paying the perfect tribute to their legendary skipper.

A last-minute loss to Leicester Tigers at Welford Road in Round Four of their European Cup pool was the first defeat since Foley passed away, but Munster look to be on their way back to the summit of the European game.

Under the leadership of director of rugby Rassie Erasmus and Jacques Nienaber, who both arrived in the summer, Munster have moved to the top of the Guinness PRO12, while they are also in prime position in Europe after three matches.

The team has been inspired according to Murray Kinsella of The42.ie, and he expects them to build on that form throughout the remainder of the season, while also giving an indication of what we might expect from the Lions on the defensive side.

He said: “They are top of the league, had seven wins in a row before last weekend, so compared to last season it’s been a success.

“The death of Anthony Foley is obviously hugely significant and is obviously a motivation for the players. A lot of them were close to him and are still close to his family. I think that will carry on over the course of the season and into the future.

“In a way it understandably overshadows what Rassie Erasmus is doing. He’s a top class operator who was close to getting the Springbok job and you can already see the impact he is making. Jacques Nienaber in defence is also having an impact.

“The two of them are top class and the technical work Munster are doing has improved massively. The game plan isn’t particularly complex but they are doing the basic details, their rucking, scrummaging, mauling, even their tackling, well. Rugby can be a simple game when you’re doing the little things right.

“One of the things to mention with Jacques is just the clarity. It reminds me a bit of what people have said about Andy Farrell, who will be with the Lions, these guys are world-class coaches but what they do is really simple.

“They make sure every player is really good at tackling and then they tell them to back themselves and come up and hit people. It looks risky at times but if you can tackle well and put the pressure on the opposition attack, you flip the whole thing on itself. I think Jacques Nienaber is very much in that school of thought so there may even be some similarity with the Lions defence this summer.”

In 2013 Conor Murray came off the bench in the second and third Tests against Australia, and has gone on to establish himself as one of the leading scrum-halves in Europe.

Kinsella believes he has improved as a player since then, and expects the 27-year-old to be a strong contender for a starting spot when the first Test comes around.

“Conor Murray has entered his prime. He’s got pretty much the complete skillset. His box kicking has always been a strength, he gets lovely height and distance on them and allows the chasing game to come in,” he said.

“His passing is very good, perhaps a bit underrated even, but he’s worked really hard on that. Greg Oliver at Munster, works really hard with him on that. His sniping game is always a threat, he’s scored quite a few tries from that and he communicates well and then his defensive game is a strength. He comes into the line at the right time, he doesn’t leave that space around the ruck, and when he gets into the line he’s got the size and technique and can really make an impact and force turnovers.

“You see his performance against the All Blacks in Chicago, that’s a real marker and I think Warren Gatland and his coaches are going to take that into account. He’s beaten the All Blacks and was exceptional in that game I think he’s a really good shout for a start.”

CJ Stander’s emergence on the international stage has been more recent but Kinsella expects him to be right in contention for a spot.

“CJ Stander for Munster, his consistency is absolutely phenomenal. It’s almost hard to understand, he always delivers for them, and for Ireland as well now.

“He’s always had the big carry, that work rate and that physical prowess, almost the chip on his shoulder. But he’s really added a lot of technical quality.

“He’s added in small details like a little fight on the ground to get the clean presentation back, his footwork in defence is better and he is controlling the ball at the back of the scrum, like Conor Murray he’s rounded out his skillset.”

Finally Kinsella expects flyer Simon Zebo to be right up there for a second Lions Tour, having also gone to Australia in 2013.

He added: “Simon Zebo is third on my list of contenders, he’s almost converted into a full-back at Munster but can play on the wing as well.

“He’s quite creative and stands out for that, you just have to look at his grubber for Iain Henderson’s try against Australia.

“He is incredibly quick, we saw that against Leicester this weekend. There’s also this idea that he’s not as hard-working but on the stats which we get from Ireland games he’s right up there in terms of rucks hit, so that’s another strong part of his game.

“That X-factor he has could also make him a very valuable bench player if you need someone to spark something in the last 20 minutes.”

In terms of Munster bolters, there appear to be two different categories – those with international experience but who are not sure Ireland starters at the moment, and those still breaking through.

Leading the first category are Peter O’Mahony and Keith Earls, with Donnacha Ryan an outside chance according to Kinsella.

He explained: “Peter O’Mahony is an interesting one because a year ago you would have had him in the contender category.

“The problem is there is so much competition in Ireland and the Lions, that you’re not even sure that he’s a starter for Ireland at the moment since his injury. With guys like CJ, Sean O’Brien and Josh van der Flier, there’s lots of competition. He looks to be getting back into top shape though, and if he can get a starting spot for Ireland in the Six Nations, he’s got a great chance. That will be huge for him.

“Keith Earls is another who needs a good Championship, but he’s got the Lions experience. His footwork is really strong but it will depend a lot on whether he’s first choice on the wing for Ireland.

“Donnacha Ryan is the third of those guys. He’s probably a long shot with the strength in depth at lock and the competition even within Ireland from guys like Iain Henderson and Ultan Dillane. But he’s a great guy to have a round and has got a personality that drives on his teammates.”

.@IrishRugby standing in a figure 8 while the Haka took place in tribute to Axel. #NZLvIRE pic.twitter.com/zVUc32kUGb


At the other end of the scale, centre Rory Scannell, No 8 Jack O’Donoghue and winger Darren Sweetnam are all relatively inexperienced, and more likely 2021 candidates, but Kinsella expects all three to feature internationally sooner rather than later – with O’Donoghue already capped in November.

“Scannell has arguably been Munster’s best player this season,” he said. “He’s played a lot of rugby at ten and is something of a second five-eighth in the Kiwi mould.

“He would certainly be a real contender to travel to Japan this summer depending on who is with the Lions.

“Similarly Jack O’Donoghue got his first cap against Canada, and has really come on strong this season. He’s still very inexperienced but was a standout for Ireland Under-20s and their captain.

“Then you’ve got Darren Sweetnam, who people have been waiting to explode for a while. He was really close to getting capped in November and is having a great season. Of the three he’s the one who I think could be a real bolter for New Zealand.

“He’s 23, so got that maturity, and if he could pick up a cap or two in the Six Nations, you never know.”

With 29 Lions in all, Munster have been a mainstay of the team throughout its history – dating all the way back to 1924 when Michael Bradley and William Roche toured South Africa.

Munster can lay claim to father and son duo Gordon and Keith Wood, who toured with the Lions in 1959 and then 1997 and 2001 respectively.

There were also family ties between full-back Tom Kiernan and his nephew Mike, who were both Lions, while Donal Lenihan’s ties to the side stretch from Donal’s Donuts in 1989, all the way through to managing the team in 2001.

Munster’s recent success has also led to major contributions, with Ronan O’Gara, David Wallace, John Hayes and Donncha O’Callaghan all going on multiple Tours in the 2000s, and Paul O’Connell captaining the side in 2009 – the second of his three Tours.

In the current squad, Murray, Zebo and Earls are all current Lions.

Murray Kinsella is a rugby journalist with The42.ie