It's been a season of celebration and change for Harlequins, adapting to life without Conor O'Shea after the Irishman took over as Italy coach this summer, while also celebrating their 150th anniversary. [more] 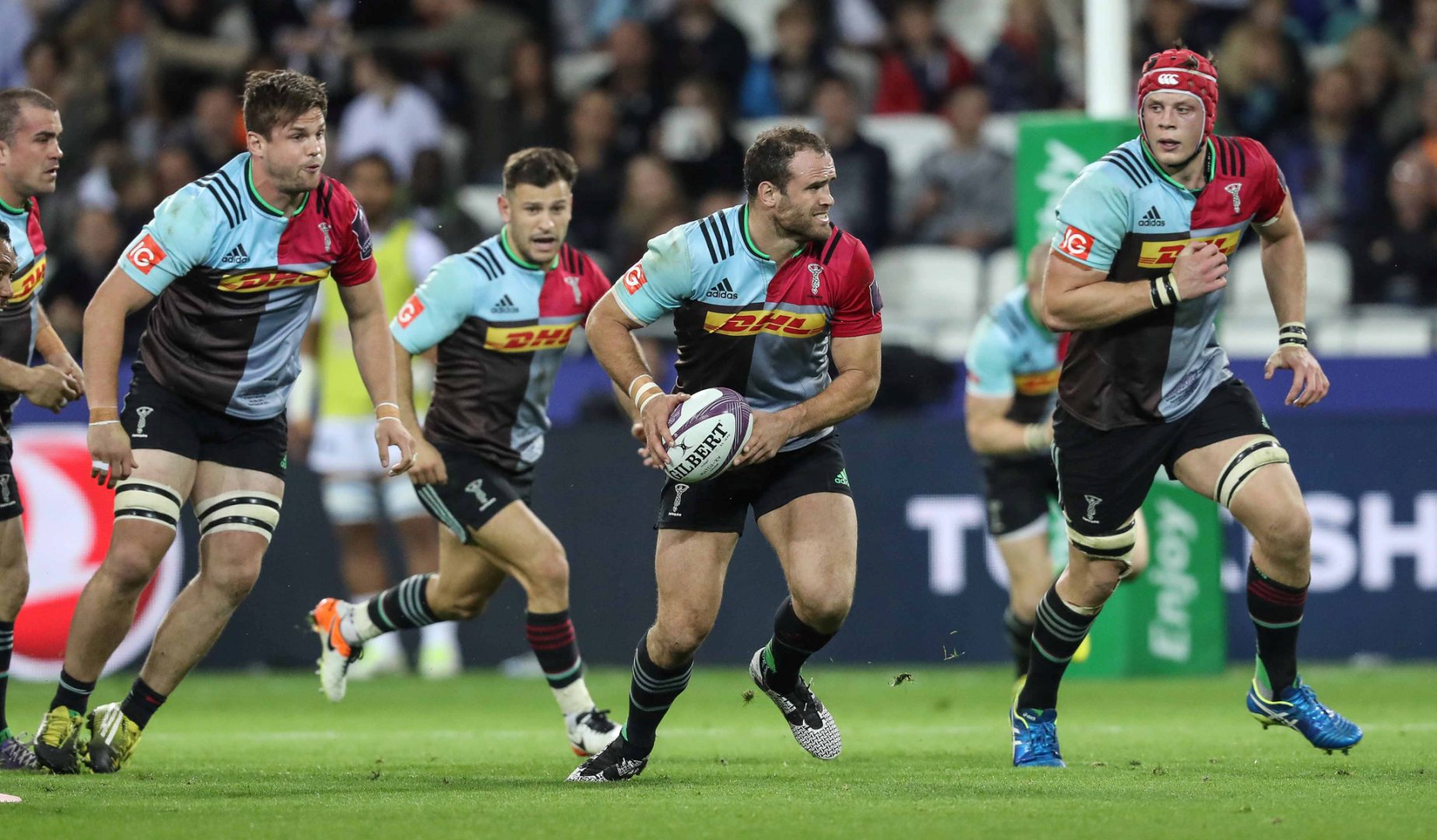 It’s been a season of celebration and change for Harlequins, adapting to life without Conor O’Shea after the Irishman took over as Italy coach this summer, while also celebrating their 150th anniversary.

John Kingston stepped up in O’Shea’s place but that transition was always going to take time, after all Quins claimed a first Aviva Premiership title under O’Shea back in 2012.

Their domestic form so far has been inconsistent, unbeaten at home but winless away in the league.

For Guardian sports reporter Gerard Meagher, the continued investment in youth is certainly a positive, but greater consistency will be crucial if they are to push up the table.

“Quins are consistently inconsistent – unbeaten at home but have lost all their away matches in the Premiership.

As he has pointed out a few times, it will take John Kingston a while to put his stamp of things. Beating Saracens at home demonstrated what they are capable of and they look set to continue to focus on youth development in the post-Conor O’Shea era.

“The starting pack in the victory against Bath at the end of November were all English and all graduates of the Quins academy which is an admirable statistic to say the least.”

Victory over Gloucester at Twickenham this week cemented Quins’ spot in the top six, and they have a number of players who will be eyeing up a spot in Warren Gatland’s British & Irish Lions squad.

Chief among them will be Jamie Roberts, a key part of the travelling parties in both 2009 and 2013 and aiming for a third Lions Tour.

There will be huge competition for places in midfield though, and Meagher feels that Roberts will need a strong RBS 6 Nations to tour once again.

He said: “It’s hard to imagine a Lions tour without Jamie Roberts but having said that, Rob Howley used him off the bench at the end of the November series.

“His crash-ball style can still be effective for Quins, but during the Six Nations he will need to prove he can have the same impact. In his favour, he’s started every game in the tournament since 2009 so is used to performing in it.

“Gatland will likely want a ball-carrying inside centre in the squad, so he has to prove he is the man for that job.”

Roberts is the one current international in the squad with Lions experience, but there are a host of other Test players who will hope to be in the mix.

In the front row Joe Marler will be looking to make the most of any opportunity that comes his way in the absence of Mako Vunipola for England, while Chris Robshaw has been vital for Eddie Jones since he took over.

Meagher said: “Joe Marler has a great chance now that Mako is out for a while. It’s been a frustrating season for him; he’s had his own injury problems – he was knocked out after 10 seconds in the win over Saracens – but he can really stake a claim during the RBS 6 Nations if he stays fit.

"Provided he can show his best form, particularly at the scrum, Gatland could do a lot worse. He is always highly thought of among his peers.

“I have a feeling Robshaw will be up against it. Gatland has so many options at flanker – CJ Stander would appear to be the leading candidate for blindside and I can’t see Gatland playing Robshaw anywhere else.

“You cannot praise him highly enough for the year he has had with England and you know exactly what you’re going to get with Robshaw – which is meant as a compliment – but the question is will that be enough to convince Gatland.

“There’s so much strength at second row that it may be Robshaw is fighting with a lock who can cover blindside for a spot.”

The other area where Quins have a number of contenders is in the back three, as Mike Brown, Marland Yarde and Tim Visser all push their cases. For Meagher, Yarde looks the best bet to be involved.

“Mike Brown would be appreciated on tour but there’s a lot of competition at full-back, with the likes of Stuart Hogg, Rob Kearney and Leigh Halfpenny who all went to Australia. The fact that Brown doesn’t really play on the wing might make it harder for him, so he’ll need a big Six Nations.

“Marland Yarde, on the other hand, might have a better chance. He’s a bit of a project for Eddie Jones, who has spoken of how he ran over McCaw the last time England toured New Zealand, so he may come into consideration.

"Similarly, Tim Visser’s name will come up in conversation too – he’s an out-and-out finisher – but again, to have a chance he needs a particularly strong RBS 6 Nations with Tommy Seymour and Sean Maitland starting Scotland’s last match.

“At scrum-half, Danny Care has a lot to do with the competition across the home nations, particularly with Ben Youngs playing so well for England to leave him coming off the bench.”

As well as their established internationals, Quins have also got a number of young players coming through, with two in particular standing out for Meagher with a view to next summer.

Back row Jack Clifford and tight-head prop Kyle Sinckler, have both been involved with England under Jones, and might earn some consideration from Gatland.

He said: “Clifford is the one that stands out. He can play anywhere across the back row and is a genuine try-scoring threat with his pace. Gatland, as with a lot of positions, has plenty of options in the back row but there aren’t many in Clifford’s mould.

“He’s in form after missing the autumn – he scored another try at Twickenham the other day, he always seems to score there for Quins – and with Billy Vunipola injured, has a great chance of starting for England during the Six Nations and putting his hand up for selection. Looking for bolters across all positions for the tour, Clifford is as good a shout as any.

“Kyle Sinckler is similar in the way he brings something a bit different and if Gatland sees what Eddie Jones sees in him then he has a chance. He’s potentially a bench option, assuming Gatland picks three tightheads.

"The England tour to Argentina may be better for his development in any case. The same goes for Joe Marchant, who impressed against Gloucester at Twickenham and certainly looks a prospect for the future.”

Harlequins have been regular contributors to Lions squads through the years, dating all the way back to 1910 and Alexander Palmer, who was part of the squad that toured Argentina.

Of those in living memory, Peter Dixon was uncapped by England when he was called up in 1971, and the flanker started three of the four Tests in the famous series victory over New Zealand.

In the front row, the likes of Jason Leonard, Brian Moore and Keith Wood all toured on more than one occasion, while Peter Winterbottom followed in Dixon’s footsteps as a Lions back row and Paul Ackford played all three Tests in 1989.

Add in Will Carling, a key member of the Lions midfield in 1993, and Will Greenwood, a Lion on three separate Tours, and there’s no doubting the Quins contribution through the years.

Gerard Meagher writes about rugby at The Guardian.