As someone who went from the international fringes to a key member of the 2009 British & Irish Lions squad to South Africa, Ugo Monye knows what it takes to reach the rugby summit. [more] 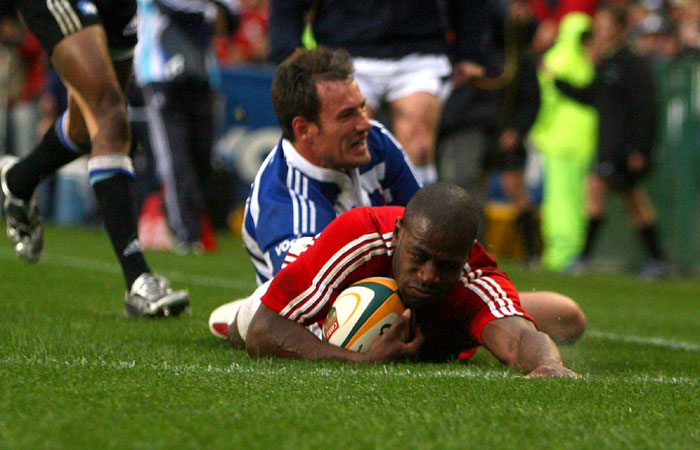 Monye went from an uncapped reserve on the bench for the England Saxons in Chicago to starting the first Test in South Africa in just 12 months when the Lions last toured 11 years ago.

The then-26-year-old subsequently grasped his opportunity with both hands, scoring a stunning try in the famous third Test win to ensure he finished the Tour as the top try scorer with five.

And while Monye expects many of the names for the 2021 Tour squad to already be pencilled in, he is confident there could be a handful of players who make a late run for Lions recognition.

“I got capped in November 2008 and ended up going on a Lions Tour with six international caps. There is all manner of opportunity and I think it’s a really interesting time,” he said.

“We have seen players emerge in the Premiership and almost get capped this season – Louis Rees-Zammit is absolute lightning and I’d say he’d go well on a fast track in South Africa.

“The impact that these players can have, I wouldn’t be ruling anyone out. There will absolutely be four or five players that are not on the Lions radar now that will be spoken about in regards to going on that Tour.

“No one knows what this rugby world in the next year is going to look like.

“But if we are able to get a full calendar of games, Autumn Internationals in whatever capacity, Six Nations as well as the domestic leagues and European competition – there’s enough games at a high level to be able to prove yourself.

“So for anyone who doesn’t feel they are automatic selection, it doesn’t matter, it really doesn’t matter. There are plenty of games, plenty of opportunity to make a late surge.”

The 2009 Tour was Monye’s first and only experience of playing in the famous red Lions jersey and despite it ending in a series defeat, he regards it as the highlight of his career.

“The Tour was so special for so many different reasons, I think it was probably the last Tour where we straddled two eras – the amateur era and the professional era,” he said.

“By that I mean, social media wasn’t really a thing then and we were able to engage with supporters and enjoy ourselves off the pitch which perhaps would be more scrutinised today.

“The challenges now, which will obviously be mirrored next year, in terms of taking on the Tri Nations champions, World Cup champions I think was so unique.

“For me, that was the best moment of my career, representing the Lions and playing the Test matches but when you speak to Brian O’Driscoll, Paul O’Connell, Martyn Williams or Stephen Jones, they say that’s the favourite Tour they’ve been on – and they’ve been on multiple.

“When you get their stamp of approval, considering it wasn’t a winning Tour, and they still have the fondest of memories of that Tour, you know you were part of a special Tour.”

Monye started the first Test in 2009 but was left out of the squad for the second Test before scoring the match-winning try in the final game – sealing a 28-9 victory that ended the Tour on a high.

“When you put on that jersey, sometimes you forget it, not because you’re naive or ignorant but perhaps the magnitude of what your representing can be overwhelming.

“You are representing every single person in Britain and Ireland, that’s what it is when you put that jersey on. I think when you take a breath and try and accept that, it’s a big challenge.”