Matfield wary of wounded All Blacks

South Africa lock Victor Matfield is disappointed he will not be locking horns with New Zealand captain Richie McCaw but does not expect the challenge of beating the All Blacks to be any less because of his absence. [more] 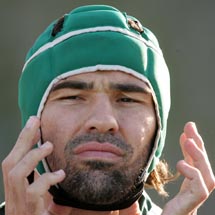 South Africa lock Victor Matfield is disappointed he will not be locking horns with New Zealand captain Richie McCaw but does not expect the challenge of beating the All Blacks to be any less because of his absence.

McCaw is out of action for at least six weeks with an ankle injury and is expected to miss the All Blacks’ first four Tri-Nations matches.

New Zealand face the Springboks on Saturday in Wellington before facing the world champions again in Dunedin on July 12.

“It’s always a pity if guys get injured. I think we all play this game because we want to be tested by the best,” Matfield said.

South Africa have not won on New Zealand soil since a 13-3 victory in 1998 and, even with McCaw on the sidelines and facing a relatively inexperienced looking All Blacks squad, the Springboks are not talking up their chances of breaking the 10-year hoodoo.

“You will never get a worse All Black team. At their worse they will still be the best in world,” said South Africa coach Peter de Villiers.

“I think Richie is a very inspirational leader and player and in any team it will have an impact if he is not there. But then again New Zealand has got a whole wealth of brilliant rugby players and I think anybody who thinks they will be a weakened side is a fool.”

One area the All Blacks struggled in in their two Tests against England was the line-out and with veteran lock Ali Williams a doubt with an ankle injury and the introduction of the new experimental law variations which will place no restriction on the number of players allowed in the line-out, they can expect to face even greater pressure on their own throw from Matfield and Bakkies Botha this weekend.

“It’s one area where we want to target other teams,” added Matfield. “Myself, Bakkies and Juan Smith, we know each other very well and we’ve been playing together for the last four or five years and we understand each other.”

While England struggled under the intense scrutiny of a rugby-mad nation, Springboks coach De Villiers has no such concerns for his players and sees no reason to put any extra protocols in place.

“They are a bunch of true professionals and they know how to behave. We are here to represent our country and they are true ambassadors for our country. So whatever they do they will do with dignity and I don’t think we need any protocols in place to prevent something they know will overstep the line,” he said.

“We trust them and believe they are here for the right reasons and we will do our best on the rugby field.”