Munster forwards coach Laurie Fisher hopes to take over the reigns with the Australian national side in three years time. [more] 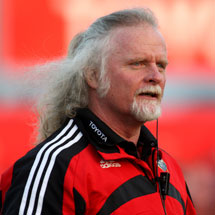 Munster forwards coach Laurie Fisher hopes to take over the reigns with the Australian national side in three years time.

Fisher, who was one of six candidates short-listed for the Wallaby job after the 2007 World Cup, believes his time with the Heineken Cup holders can help him achieve that goal.

"When the opportunities come, I’d love to coach a national team and I’d love that team to be the Wallabies," said Fisher, who has helped his new side make an unbeaten start to the season.

"The coaching world will open up again after the 2011 Rugby World Cup and what I’ve got to do is knuckle down, help Munster move forward and become a better coach."

A former physical education  and health science teacher, Fisher led the Brumbies for a three-year period from 2005 before moving to Ireland in July of this year.

Although Fisher would love to be in charge of his national side already, he insists that his current position will give him an even better grounding to succeed in international rugby.

“It’s a global game in a global market. If we were only allowed to work in our country of nationality then I wouldn’t be here with this wonderful opportunity with Munster.

“I’ve come here to get out of my comfort zone, learn from the way rugby is played here. Different coaches, different players, different ideas, so it’s a real growth period for me.

“I thought that I would have done a more than capable job [with Australia]. That said, I wasn’t disappointed to lose out to Robbie Deans, who will take Australian rugby forward, not just the Wallabies.”