Danny Cipriani made a welcome return to action some six weeks ahead of schedule, but the England star was unable to prevent Bath from a recording a bonus-point win over London Wasps on Wednesday night. [more] 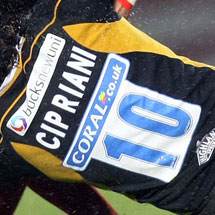 Danny Cipriani made a welcome return to action some six weeks ahead of schedule, but the England star was unable to prevent Bath from a recording a bonus-point win over London Wasps on Wednesday night.

Cipriani kicked 11 points at Adams’ Park but four tries from the visitors ensured the visitors left for home with their fourth victory of the Guinness Premiership season.

England’s new No10 had not been expected to wear Wasps colours until mid-November, but the 20-year-old recovered impressively from the fracture dislocation to his ankle that ended his 2007/08 season back in May.

The man many are tipping as a potential Test starter for the Lions in nine months time did little wrong (the dropping of a high ball excluded), making his tackles and displaying his attacking capabilities on more than one occasion. His success rate of four goals from five attempts also suggested that, although he may be lacking match fitness, his goal kicking is already back to the required standard.

Danny Cipriani could be pushing for a England spot this November

The fact that the only blemish on Cipriani’s record came through a penalty attempt that was originally given as three points by the touch judges was a major talking-point at the post-match press conference. Wasps coach Sean Edwards voiced his clear disappointment that referee Sean Davey decided to ignore both his assistants and rule that Cipriani’s attempt had drifted wide of the right-hand upright.

The news that Jonny Wilkinson will now spend a lengthy spell on the sidelines as a result of a dislocated knee makes Cipriani’s comeback relevant to a far greater proportion of the English rugby public than the 9,052 supporters at Adams Park.

Wilkinson’s injury meets the ‘extenuating circumstances’ that allow him to be replaced by a player of the same position in the England Elite Player Squad for next month’s autumn internationals. That player is expected to be Cipriani.

The Wasps Academy product showed more than enough in his 53 minutes on the field to suggest that he will be approaching his best by the time Martin Johnson’s men face the Pacific Islanders at Twickenham on November 8.

Having proved over the last four weeks of contact training that his ankle has fully recovered, game time was what England’s most-talked about rugby player was most looking forward to. After his encouraging performance against Bath, it is likely that he will be given enough opportunities to prove himself prior to Johnson’s first home game in charge of the national side.

Although Lions head coach Ian McGeechan will have been delighted to see Cipriani back on the field of play, he will have been far less pleased to watch his Wasps side concede four tries and slip to their second home defeat of the Premiership campaign so far.

Having allowing Bath to build an early 12-3 lead thanks to tries from scrum-half Michael Claassens and Lions prop Matt Stevens, the home side clawed their way back into things to take a four-point lead into the half-time interval.

EPS squad member Riki Flutey crossed for Wasps’ only try of the opening 40 minutes, with Cipriani contributing the remaining points for the reigning Premiership champions.

Bath’s Stevens continued where he left off in the early stages of the second period as another barrelling run set the platform for his side’s third try of the night. Stevens burst through from just inside the opposition half before finding support on the edge of the Wasps 22. The visitors then patiently recycled the ball, with hooker Pieter Dixon crashing over from close-range on the right-hand side.

Despite edging ahead again through a Tom Rees try with an hour on the clock, the Wasps defence were unable to hang on to their advantage.

Steve Meehan’s men crossed once more through wing Joe Maddock after a superb gliding run from Nick Abendanon and Wasps had no way back.

Springbok fly-half Butch James, the man likely to be attempting to shoot down the Lions next summer, added the conversion and, although he was off-target with a 71st-minute penalty, Bath hung on for a memorable win.

Cipriani’s comeback: what they said

"It was very encouraging that he came through unscathed. He got some tackles in, helped create a try for Riki Flutey and put some nice goal kicks over.

"The plan is to see how Danny reacts in the morning. The next 24 hours will be very important for him."

"We said we’d review it at half-time and, if he was ok, we’d probably go for another 10 minutes."

Cipriani was one of England’s star performers last season

"I think we were the only people who didn’t talk about him!

"What I said on Saturday was that, if he was playing and we had a chance to put a shot on him, we would. It doesn’t matter who you play, if an opportunity to make a big tackle on an opponent arises, players take that opportunity.

"As it happens, I think he could be relatively pleased with his first appearance."

"I was very happy to get through the match. I was a bit rusty at first and I made some mistakes which are easily eradicated from my game after I’ve looked at the analysis.

"I thought my goal kicking was good and I felt a bit more confident in my defence. I’m just glad to have got through the game, but I’m still disappointed by the fact that we lost.

"The whole plan was for me to plan 50 minutes and I came through so I’m happy about that. I just want to get a run of games where, hopefully, I’ll be able to put in some performances.

"I’m very disappointed for Jonny that he got injured. You wouldn’t wish injury on any other player so my heart goes out to him but my main focus was just on the fact that we needed Wasps to win.

"I’ve had no setbacks whatsoever, so I’ve had quite an easy time of it. But, whatever people want to say about me, it’s been a tough last four months and you’re only going to get back fit if you work hard. That’s what I’ve been doing."