Boost for Boks before Lions

The Springboks' end-of-year tour to the UK has given the world champions a 'psychological boost' in the build to next year's series with the Lions says South Africa team manager Arthob Petersen. [more] 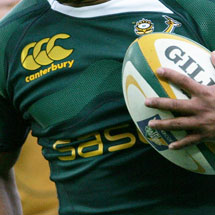 The Springboks’ end-of-year tour to the UK has given the world champions a ‘psychological boost’ in the build to next year’s series with the Lions says South Africa team manager Arthob Petersen.

Petersen saw the Boks record three successive victories over Wales, Scotland and England, with a 42-6 win at Twickenham providing a fitting end to the season.

"The wins, and particularly the way we ended against England, will have given us a psychological boost for the Lions tour," said Petersen, who came in as interim team manager following the promotion of former Newport and Wales centre Andy Marinos to the position of acting managing director of SA Rugby.

"The tour has given us a comprehensive insight into some of the players who will be part of the British & Irish Lions tour squad in 2009.

"We have a lot of work to do between now and then but I am convinced that we are on the right track and that if we can consistently produce performances such as those over Australia and England this year, we will be able to secure a series win next year."

Petersen, whose position is set to be reviewed before the Lions arrive in South Africa, believes the recent tour proved a huge success for the Springboks. The three wins in Cardiff, Edinburgh and London saw head coach Peter de Villiers end his first year in charge on a high after the Boks finished bottom of the 2008 Tri Nations table.

"We have extended our winning sequences respectively against Wales to 10, against Scotland to seven and against England to six. The 42-6 win over England was a record defeat for the English at home.

"But these are the statistics. The real success of the tour is measured in what we have achieved as a team and the progress we have made over the past few weeks."

The tour was the Boks’ first undefeated tour of Europe in 11 years and Petersen had nothing but praise for the contributions of the entire squad. The veteran administrator believes the strength in depth shown by his countrymen mean they will have a great chance of avenging their 1997 loss to the Lions when they meet in Durban, Pretoria and Johannesburg in seven months time.

"John’s contribution was nothing short of colossal and he was ably supported by the senior players around him. Whilst injuries prevented us from gathering a true measure of the success of John’s switch to tighthead prop, when he did play there he stood his ground and looked very comfortable.

"Secondly, it showed the wealth of depth that we have in our squad. When we were affected by injuries during the last week of the tour, we had players of quality to fill the gaps left by injured players. These guys performed exceptionally, notably Ricky Januarie who was man of the match against England.

"The depth was also evident in the impact made by players coming off the bench. This is borne out in part by Jaque Fourie’s spectacular tries against Scotland and England and the contributions made by Brian Mujati, Andries Bekker, Gurthro Steenkamp, Ryan Kankowski and Francois Steyn. We also welcomed a new member into the Springbok family with Heinrich Brussow making his debut against England.

"The tour has shown that Ruan Pienaar definitely has a future as a Test flyhalf. He is not yet the complete product but he made great strides over the past month and proved he had what it takes to make the switch. He made a major contribution to the victory over England, both tactically and with the boot."