The number of Lions representing Wales this weekend has once again hit double figures. [more] 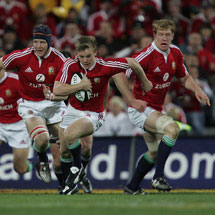 The number of Lions representing Wales this weekend has once again hit double figures.

A total of 13 Lions featured in the 19-12 loss to New Zealand last Saturday and a further 10 will face Samoa on Friday night.

With wing Shane Williams, fly-half Stephen Jones and openside flanker Martyn Williams all rested for the visit of Samoa, loosehead prop Gethin Jenkins is the only member of the matchday 22 to have appeared on both the 2005 and 2009 Lions tours.

Cardiff Blues contribute seven players to the starting line up, while six Ospreys also start alongside Luke Chateris of the Newport Gwent Dragons at the Millennium Stadium.

Peel, who was the Lions’ first-choice No9 in 2005 but missed Saturday’s narrow loss to the All Blacks due to club commitments, is the only member of the squad to play his rugby outside the Magners League.

Lions forwards coach Warren Gatland makes five changes to his run-on side for the second of four autumn internationals as his team look for a boost ahead of their clashes with Argentina and Australia.

Tom James comes in for Shane Williams on the left wing in the third change to the backline.

Up front, Rees is replaced by Huw Bennett at hooker and Blues flanker Sam Warburton is named instead of regional team-mate Martyn Williams at openside.

Wales have lost three of their six encounters with Samoa, including humiliating defeats in both the 1991 and 1999 World Cups in Cardiff.

Unsurprisingly given the history between the two sides, Gatland is not expecting an easy ride against a Samoan squad that includes a host of European-based players.

"Samoa have proved to be a difficult side for Welsh teams in the past and we don’t expect the standard to be any different on Friday night,” said Gatland, who is entering his third season in charge of Wales.

"We’ve named a strong side and shown the maximum amount of respect to Samoa.

"They are a tough physical team with players featuring for some of Europe’s top sides and there is no question of us under-estimating what we are up against.”

As for the changes in personnel following disappointment against New Zealand, Gatland says he has no qualms about the players he has brought in to face the Samoans.

"Dan Biggar is a bright prospect and his performances at the Ospreys this season mean he fully deserves his opportunity,” added Gatland.

“Dan is surrounded by experience with Dwayne Peel and Jamie Roberts on either side of him which should help further smooth his transition to international rugby.

"Tom James has another chance to show us what he can do and Sam Warburton has been knocking on the door for some time after impressing the coaches on tour to North America this summer.

"But elsewhere we have maintained a consistency in selection and we will be looking to put a performance in on Friday night that will help create the momentum to finish off this series with wins and build on what we achieved for large parts of the game against New Zealand."