Lions hopeful Alex Cuthbert will be basing his challenge for a 2013 tour spot from these shores after agreeing to stay with Cardiff Blues. [more] 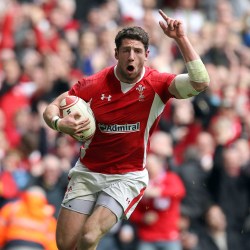 Lions hopeful Alex Cuthbert will be basing his challenge for a 2013 tour spot from these shores after agreeing to stay with Cardiff Blues.

The Wales wing had been heavily linked to a move overseas, particularly to Top 14 outfits Racing Metro and Toulouse, but has instead decided to remain at his current club.

Cuthbert, who shot to prominence this season despite only being on a Wales Sevens contract and a development deal with the Blues, has decided against heading abroad in favour of a one-year extension with his home region.

And while his decision to stay with the Blues is undoubtedly a boost to the Welsh national side, it could also a real plus for his Lions chances given the fact that the Top 14 season goes on longer than the RaboDirect PRO12 campaign.

“I had a few offers outside of Wales and, having gone through all the options thoroughly with family and friends, I came to the conclusion that the best option was to stay at the Blues, showing my loyalty to the region, coaches and the fans,” said Cuthbert.

“Playing for Wales was a huge part of my decision to stay with the Blues and playing for the region regularly will hopefully strengthen my chances of keeping my place in the Wales team.

“Obviously with Phil Davies taking over as head coach it’s exciting times for the region as well. I know Phil from my time with the Wales Sevens where he was involved. He’s a great coach, I’ve heard he’s very well organized and puts good structures in place which I know will benefit the club next season.

“I’m also very excited that the Blues are moving back to the Arms Park. I’m yet to play there in front of a full crowd so hopefully we can do that next season. I’ve watched a few games down there and the atmosphere is unbelievable and if we maintain good crowds that will help us no end on the pitch.”

Cuthbert only made his Wales debut against Lions opponents Australia in December of last year but has since held down a regular wing spot following the retirement of legendary Lion Shane Williams.

The 22-year-old Gloucester-born former UWIC student scored the crucial try in the Grand Slam clinching win over France in March and attracted major interest from elsewhere in the months that followed.