Quade Cooper has been banned from Saturday's Super Rugby play-off but recommitted himself to Australia. [more] 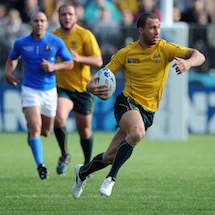 Quade Cooper has been banned from Saturday’s Super Rugby play-off but recommitted himself to Australia.

The Queensland Reds fly-half has been slapped with a one-week suspension by SANZAR after high-tackling Berrick Barnes in the Reds’ victory over the Waratahs.

He will now miss their clash against the Sharks on Saturday but he has handed both the Reds and the Wallabies some good news by penning a three-year contract.

The maverick fly-half had been linked with lucrative moves to Europe and rugby league. But he is now in line to face the Lions in 2013.

"I'm really enjoying my time here, I'm in a good place at the moment, and I'm enjoying where the Reds are going as an organisation and as a team," Cooper told Fox Sports.

"We've got a bright future ahead and hopefully a few more titles in the next few years.

"Rugby league was something that was in the frame and I was quite interested in it. But I felt that staying with the Reds was
the right thing to do."

Utility Ben Lucas and inside-centre Mike Harris are the front runners to start at fly-half in Cooper’s absence on Saturday
If the Reds are able to overcome the Sharks, Cooper will be available for the semi-finals.