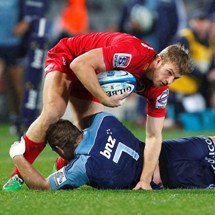 Reds wing Dom Shipperley will make his Wallaby debut this weekend as Stephen Moore becomes his country’s most capped hooker.

The 21-year-old will be looking to take a decent Super Rugby strike rate on to the international stage as the Lions’ next opponents seek a first win of the new Rugby Championship campaign.

Shipperley, who has 10 tries in 24 appearances for the Reds, comes in for the injured Drew Mitchell after the Waratahs wideman was told he faces up to a year on the sidelines with an ankle problem.

Fellow wings Joe Tomane and Cooper Vuna, who both featured in the summer Tests, are also injured, while utility back James O’Connor hasn’t hit his target of a return to fitness in time for Round 3.

Head coach Robbie Deans has recalled Kurtley Beale following a nightmare individual performance in the opening Test with the All Blacks in Sydney, with Adam Ashley-Cooper moving from full back to centre.

Veteran No8 Radike Samo replaces Scott Higginbotham but maverick fly-half Quade Cooper retains his place in the side despite the disappointing nature of Australia’s attacking display in the 22-0 reverse to New Zealand in Auckland last Saturday.

With James Horwill and David Pocock both still unavailable, scrum-half Will Genia captains the side as Moore moves past Jeremy Paul’s record of 72 caps in the No2 shirt.

Having retired from club rugby earlier this year, Nathan Sharpe is set for another farewell fixture in his adopted city of Perth.

The Wallabies may have endured a far from ideal start to the southern hemisphere’s newly expanded competition but they boast an impressive recent record against the Springboks.

Deans’ troops have won each of the last four fixtures between the two teams, starting with an historic success on the Highveldt in 2010 and including a controversial World Cup quarter-final triumph last October.