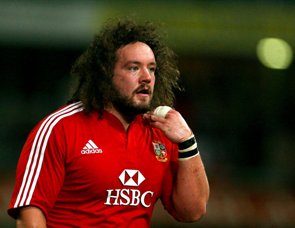 2009 Lion Adam Jones has handed Wales a scare after suffering a knee injury.

The triple Grand Slammer sustained the injury in training last week and suffered a reaction over the weekend.

He underwent scans on Monday and while the Ospreys are optimistic that it is nothing serious, Jones’ return to action will be delayed.

The formidable scrummager had been set to make his first appearance of the new season off the bench for the Ospreys against Glasgow on Friday. “Adam took a bump last Tuesday in training,” said Ospreys head coach Steve Tandy.

“He carried on through the session and trained Thursday and Friday. Then all of a sudden, over the weekend, it started to stiffen up a little bit.

“We scanned him just as a precaution and I’m waiting for the physios to take another look at the scan.

“We were looking to have him come off the bench this weekend. It would have been great to have him in, but it’s something we can’t do.

“But I don’t foresee him being out for a large period. It’s not a real major injury for him. It’s settling down a little bit. He’ll probably be out for a couple of weeks. He will definitely miss this weekend and potentially the Scarlets game (Sept 21).

“Then hopefully we’ll have him back available for us against Munster at the end of this month (Sept 29)."

The injury could leave Jones, who has not played since Wales’ summer tour of Australia, facing a race against time ahead of the first two rounds of the Ospreys’ Heineken Cup campaign and the autumn international series.

It is the last thing the 86-cap prop needed. Speaking following his testimonial last month Jones highlighted his desire to embark in another memorable season culminating in a second Lions tour.

“Touch wood, it will work out with a Lions tour,” said Jones.

“The 2009 tour to South Africa is up there as a career highlight, that and the third Grand Slam.

“There’s a lot of hard work between now and then, a lot of things that need to go right, such as form and fitness, but, fingers crossed, they’ll go okay and there’ll be another trip.

“There are a lot of good tight-heads out there now. It’s quite competitive and it will be tough, but I’m confident I’ll do it, form and fitness permitting.”