Pat McCabe is determined to repay the faith Robbie Deans has shown in him. [more] 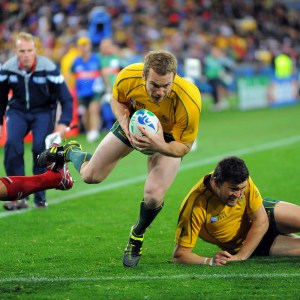 Pat McCabe is determined to repay the faith Robbie Deans has shown in him.

The Australia centre has been recalled to face Argentina in Saturday's Rugby Championship clash after recovering from the stress fracture he suffered in his foot last month.

McCabe admits he was shocked to get the call-up but is determined to produce the goods.

"Getting the call-up was a nice surprise because I thought it would be another week or so away," said McCabe.

"It is a big vote of confidence from Robbie that he thinks I can come straight back in and play well.

"I really do appreciate that and I want to return the favour by playing well against Argentina. I feel physically that I am again ready to go."

The 24-year-old ACT Brumbies centre has been impressed by what he has seen of Argentina and anticipates a tough examination at Skilled Park on the Gold Coast.

But he is confident the Wallabies will have the firepower to make it two wins on the bounce.

"They have been hugely impressive so far and are an extremely physical team," added McCabe.

"They are a side which loves firing in and disrupting opposition ball. So you just know it is going to be a hugely physical contest.

"But they do get relatively narrow in defence and because they commit so hard to the breakdown it does create some chances for us.

"So we'll hopefully throw the ball around a bit. If we are effective at the breakdown, we will be able to do that."