Declan Kidney insists his own contract situation will take a back seat as Ireland push for notable success over the coming months. [more] 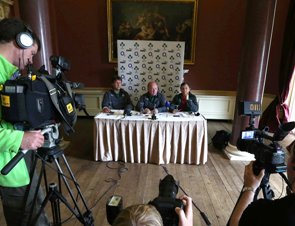 Declan Kidney insists his own contract situation will take a back seat as Ireland push for notable success over the coming months.

Kidney’s current deal expires at the end of the season but the 52-year-old says his focus is entirely on beating South Africa, Fiji and Argentina this autumn and then returning to the top of the northern hemisphere tree in the spring.

“We’re talking about my situation?” Kidney said in an Ireland press conference at their two-day training camp in Kildare.

“My situation doesn’t matter. The only thing that matters is that we do well. That’s been the only pressure I’ve been under from day one.

“We’ve a fantastic occasion coming up so that’s the only thing I worry about. The other stuff that goes along with that doesn’t matter. I’m not important in this: all that matters is that Ireland go well.”

The ‘fantastic occasion’ Kidney talks of is a mouthwatering match up with the Springboks that kicks off Ireland’s season on November 10.

They follow that up with a non-cap clash with Fiji before facing Rugby Championship newcomers Argentina at the Aviva Stadium two months from now.

Ireland head into the series on the back of a 60-0 defeat to New Zealand in the summer but Kidney insists lessons have been learnt from the manner in which his side went from running the World Champions so close in the second rubber to being humiliated in the third.

“The results are not the way we would have wanted them,” admitted Kidney.

“We learned a huge amount from that. I’ve been in this long enough to know that out of that, great things can come – it all depends on how you approach it.

“You look at other sides like England, who went through the same sort of thing, then a couple of years later they were winning all sorts of things.

"At every meeting we've had, we've looked at areas we can improve. After the severe disappointment of the last match, which is what you're judged on, it really focuses the mind and you can get to the kernel of things."

Kidney admits the upcoming games are of huge importance to Irish rugby as they look to rediscover the form that saw them secure a first Grand Slam success in 61 years in his debut campaign as coach back in 2009.

The World Cup win over Australia further hinted at Ireland’s potential but the lingering bad taste from the frustrations of their most recent outing against the All Blacks means there’s plenty to prove in November.

“They're games we need to win for a whole host of reasons,” added Kidney, who insists he will be picking his team on form rather than reputation.

“It's our next time out in an Irish jersey. No matter when you do that, it's a case of representing your country to the best of your ability.

“There's the added thing that the last game went badly wrong and we want to rectify that. And there's the Rugby World Cup – we must maintain our top-eight ranking, because we will have to live with that for the next three years.

“I believe a lot of the time the team will by and large pick itself and then I'll have to step in and make decisions about a few places. You always try to pick on form. You don't hand out a green jersey easily.

“If 15 players are playing well and the team picks itself, happy days for me. But the job of the coach is when fellahs are playing at equal standards. So, if there are 30 fellahs playing really well, someone has to make the choice and that's the role of the coach.

“And that's what we want – we want 30 fellahs playing really well.”