A pair of Lions stars have now been honoured for their work in the food world. [more] 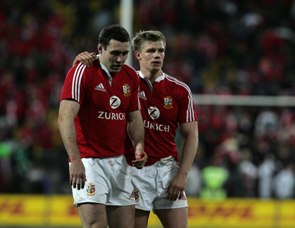 A pair of Lions stars have now been honoured for their work in the food world.

An eaterie co-owned by Dwayne Peel and Stephen Jones picked up the Best Restaurant in Wales award at a prestigious London ceremony this week.

Peel and Jones’ Sosban restaurant in Llanelli scooped the highly coveted AA Award – considered the crème de la crème of restaurant Oscars – at the Hilton Hotel on Park Lane despite only opening their doors last September.

“We are all immensely proud that we offer top quality food from local suppliers in wonderful surroundings, which makes Sosban a unique dining experience.”

“It was an honour to be in the company of such high profile restaurateurs and a wonderful feeling when Sosban was announced as the best restaurant in Wales,” added Peel.

“It is fantastic to be given such a prestigious award in our first year of business. It is a tribute to all the directors and the team at Sosban.”

Despite their move into the food industry, both Jones and Peel are still very much focused on their playing careers.

Jones swapped the Scarlets for London Wasps this summer and was in fine form in their win over London Irish a week-and-a-half ago, while Peel is currently first-choice scrum-half half at fellow Aviva Premiership outfit Sale Sharks.

The duo guided Wales to Grand Slam glory in 2005 and were rewarded with Test spots when the Lions headed to New Zealand later that year.

Both men featured in all three internationals against the All Blacks, with Peel starting in Christchurch, Wellington and Auckland, while Jones started Tests one and three and replaced Jonny Wilkinson in Test two.

Peel’s career has struggled to hit those heights again but Jones was the Lions’ starting fly-half in each of the three Tests with the Springboks’ three years ago.