Jonny Wilkinson and Rob Andrew were both double Lions tourists - but who would you pick as England's finest No10 to play for the combined side from the 11 post war tours? [more] 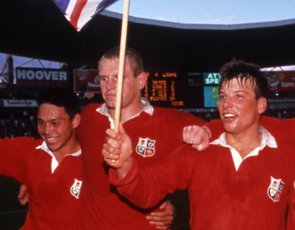 Jonny Wilkinson and Rob Andrew were both double Lions tourists – but who would you pick as England’s finest No10 to play for the combined side from the 11 post war tours?

Wilko picked up one win in six Tests in 2001 and 2005, while Andrew won three out of five and was crucial in the 1989 Test series triumph in Australia. Tough choice, but you also have Richard Sharp to consider, who played in two Tests in South Africa in 1962.

And there is more of the same selection trauma in the back row. If you are searching for a No8, do you go for Lawrence Dallaglio or Dean Richards?

The former was a hero in South Africa in 1997, and played in all three Tests in the 2-1 series triumph, while the latter was a stalwart in six successive Lions Tests in 1989 and 1993, winning three and helping to secure the series in Australia.

Peter Dixon, Roger Uttley, Mike Teague or Ben Clarke provide the next conundrum at blindside flanker. Dixon played in three of the four Tests on the victorious 1971 tour to New Zealand, helping to snuff out the likes of Brian Lochore, Alex Wyllie and Ian Kirkpatrick in a series the Lions won 2-1, with the fourth game drawn.

Clarke was one of the stand-out players on the 1993 tour to New Zealand and formed an all-England back row unit with Richards and Peter Winterbottom so surely blindside has to be one of the toughest choices in this particular XV?

Every rugby fan is a selector at heart and below is a 15 to start the debate.

So tell us, who would be your finest English Lions since the 1950 tour to New Zealand and Australia?