Ireland coach Declan Kidney felt his side were 'smothered' by South Africa in the second half of their 16-12 defeat on Saturday. [more] 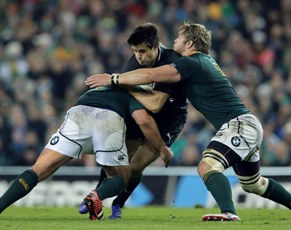 Ireland coach Declan Kidney felt his side were ‘smothered’ by South Africa in the second half of their 16-12 defeat on Saturday.

Kidney’s troops led 12-3 at the break but failed to score in the second period as the Boks took control.

A Ruan Pienaar try while Jamie Heaslip was in the sin bin shortly after the interval brought the Lions’ last opponents to within a couple of points and they then squeezed the life out of the Irish to start their European tour with a win.

"Once South Africa got their mauling game going, they smothered us," Kidney told RTE Sport.

"With the breakdown, we were unable to get quick ball in the second half.

"We were going alright until half-time but Test matches always have four or five different parts."

But rather than being downbeat about the defeat, Kidney was keen to remain positive, thanks in part to the introduction of a number of new faces and the attitude of his side in the absence of star names like Brian O’Driscoll, Paul O’Connell, Stephen Ferris, Sean O’Brien and Rob Kearney.

Kidney was impressed with how debutant prop Michael Bent stepped up to the occasion, as well as fellow newcomers Richardt Strauss, David Kilcoyne and Iain Henderson and the likes of the inexperienced Simon Zebo, who was switched from wing to full back.

“It’s been a difficult fixture list but we've a lot of young players and new caps that came into it there and it’s all about being as positive as possible because we’re just at the start of a series now,” added Kidney, whose men also face Fiji and Argentina this month.

“There’s a lot of inexperience there and I think a lot of them stood up. It’s about being able to do that week in, week out.

“We have good players here now so we just need to learn from it. We've got another big game against Fiji in Limerick next week and while there's a lot of inexperience, a lot of them stood up."

Four penalties from Lions hopeful Jonathan Sexton had given Ireland a decent advantage at the Aviva Stadium but their failure to put points on the board after JP Pietersen had been yellow carded for an early tackle on Chris Henry ultimately cost them dear.

Heaslip’s indiscretion as the Boks battered their way to the line wasn’t met with the same generosity that the Irish showed their opponents as the visitors scored 10 points in the captain’s absence.

Pienaar’s sniping score underneath the grasp of Donnacha Ryan and directly underneath the posts was added to by a Patrick Lambie conversion and penalty as the Boks led for the first time.

Another Lambie three pointer made it a four-point ball game with 11 minutes to go and South Africa held on with some ease as Ireland ran out of ideas in Dublin.