Scottish wing Tim Visser enhanced his growing reputation in front of British & Irish Lions head coach Warren Gatland by scoring twice in his side's 51-22 defeat to the All Blacks. [more] 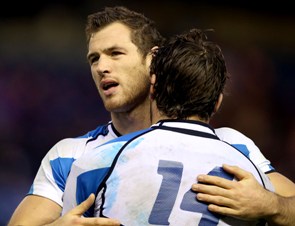 Scottish wing Tim Visser enhanced his growing reputation in front of British & Irish Lions head coach Warren Gatland by scoring twice in his side’s 51-22 defeat to the All Blacks.

The ‘Flying Dutchman’ crossed the New Zealand line once in each half on his Murrayfield Test debut as he helped the Scots to match their best ever try tally against the All blacks with three.

This may have been the world champions’ 27th win in the 29 meetings between the two countries – the other two were drawn – but the Scots scored their highest number of points against the tourists for 16 years.

The main difference between the two teams was the imperious Dan carter, who picked up another man of the match award after making three of his side’s half-a-dozen tries, converting and six and netting 21 points.

Scotland’s third try came from prop Geoff Cross, who was another player to showcase his credentials in front of Gatland and Lions tour manager Andy Irvine.

Julian Savea scored two of his side’s tries and there were other scores for the All Blacks from Israel Dagg, Corey Jane, Andrew Hore and Ben Smith. The All Blacks move on to play Italy, Wales and England, while Scotland entertain South Africa this weekend.