Former Lion Ryan Jones will captain Wales for a record 29th time after Sam Warburton was dropped to the bench for Friday's clash with Samoa. [more] 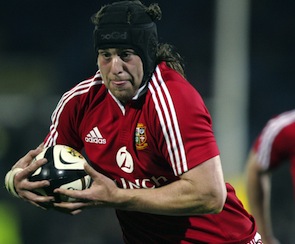 Former Lion Ryan Jones will captain Wales for a record 29th time after Sam Warburton was dropped to the bench for Friday’s clash with Samoa.

The Six Nations champions are still reeling from their 26-12 loss to Argentina but return to action at the Millennium Stadium in a day’s time.

And interim head coach Rob Howley has rung the changes with Warburton the biggest casualty. Justin Tipuric takes his place in the starting line-up, while Jones, a Lions tourist in 2005, has been handed the captain’s armband.

Elsewhere in the forwards Bradley Davies replaces 2009 Lion Alun Wyn Jones, who has been ruled out of the series with a shoulder injury, and Paul James and Richard Hibbard both start.

Behind the pack 2009 tourist Mike Phillips returns to form a new half-back partnership with Dan Biggar. Lions Man of the Series from South Africa, Jamie Roberts has been passed fit despite being knocked unconscious against Los Pumas, and lines up alongside Ashley Beck.

“With a short six day turnaround it was important for us to freshen things up and also make use of the competition for places we have within this squad, something which has been a key ingredient for the success of the squad over the last 18 months,” said Howley.

"In making changes we also needed to bring in some genuine experience. It is important to have leaders throughout the team and we are hoping the likes of Mike Phillips, who made a positive impact last week, can bring his experience to the side.

“Ryan reaches an impressive personal milestone, it will be a huge honour for him but in the context of what happened last week his and the team’s priorities are about producing a performance.”

Samoa have a track record of causing upsets in Wales, having recorded two wins in Cardiff during the nineties but the Dragons triumphed the last time the two sides met – during the pool stages of last year’s World Cup.

Howley admits Wales are under the microscope following last week’s shock defeat but he is confident his charges can bounce back.

“We know we are under pressure to perform and that pressure is greatest from within,” added Howley.

“This squad has shown in the past that we have the character and resilience to get back to winning ways. We have every confidence that we will come back strongly on Friday night.”