Barnes back as Aussies change four

Berrick Barnes has been recalled to the Wallaby starting line up for Saturday's clash with England. [more] 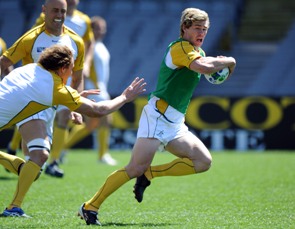 Berrick Barnes has been recalled to the Wallaby starting line up for Saturday’s clash with England.

Barnes returns at full back in place of Mike Harris for his first start since puncturing a lung in the 31-8 defeat to South Africa in early October.

Fellow first-team regular Digby Ioane is also named in the side, with the star wing having recovered from a knee injury that kept him out of the Bledisloe Cup draw with New Zealand and the 33-6 defeat to France.

Ben Alexander is another key man to have put his injury woes behind him having been sidelined with a wrist problem since the last Rugby Championship win over Argentina in Rosario.

The final alteration to the first XV comes at lock, where Sitaleki Timani’s recovery from a tight back is a welcome boost given previous starter Kane Douglas’ knee injury and Rob Simmons’ eight-week suspension.

Inside centre Pat McCabe has been ruled out with a sore neck after experiencing regular stiffness since the game in Paris last weekend, while a calf injury prevents David Pocock from coming back into the fold following a lengthy lay off with knee damage.

Ben Tapuai moves from the No13 shirt to No12, with Adam Ashley-Cooper stepping from the wing to join him in midfield.

The Wallabies are looking to bounce back from a humiliating reverse against the French but head coach Robbie Deans knows a tough test awaits at Twickenham against an England side fresh from hammering Fiji 54-12 last time out.

"There aren't too many challenges in Test rugby that are greater than playing England at Twickenham," said Deans, who includes just five starting players who began the last encounter between the two teams two years ago.

"We are playing an England side that has been building up under its new leadership and will see Saturday as the chance to lay down a marker for the future. They will be excited by the opportunities they saw out of our performance last weekend.

"But it goes both ways. Saturday is a significant opportunity for us as a group as well. It's going to be a great occasion, and one that the whole group is looking forward to."