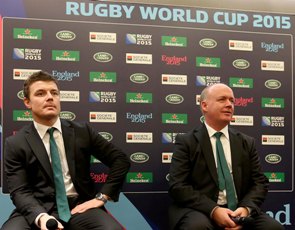 O’Driscoll is hoping for a four successive Lions tour next summer having featured in 2001, 2005 and 2009 but he remains non-committal on when he will eventually hang up his boots.

A return to Australia with Britain and Ireland’s elite some 12 years after his first visit would appear to present the perfect send off for the 33-year-old but his current injury status means he finds it hard to really think about when he will call it a day.

The Leinster centre has been sidelined with an ankle injury since late October and missed Ireland’s autumn campaign as a result.

And with a return date still uncertain, O’Driscoll is undecided on whether he will play on next term,

"I don't know because I haven't even wanted to contemplate next year because I'm not playing," said O’Driscoll.

"It's hard to talk about that when you're not playing.

"So when I get into Six Nations camp, hopefully I'll get back playing and see how that works out, see how the body feels.

"It's just the body can only last so long and we'll see how much longer I can get out of it. If I'm still at the level I need to be at to play international rugby, I'll continue playing because I still enjoy it.

"But I need to know when to call it a day as well, I need to listen to this (his body)."

O’Driscoll was talking at the draw for the 2015 World Cup where Ireland were pitted alongside France and Italy in Pool D.

Having already appeared at the global gathering in 1999, 2003, 2007 and 2011, the thought of a fifth World Cup still gets O’Driscoll’s heart racing, although he admits the tournament will be just out of his reach.

"It's funny, I was sitting there and still I was enthusiastic. A little bit of you is resigned to the fact that you're not going to be there, but it doesn't mean you don't want to be," added O’Driscoll.

"It's weird, coming in I was very relaxed, no pressure's on it because I don't for a second anticipate that I'll have any involvement. But something stirs you deep down…I think it's probably 18 months too far.