Plenty to play for

The autumn internationals may be behind us but a massive month of rugby lies ahead as the race for Lions selection continues to gather pace. [more] 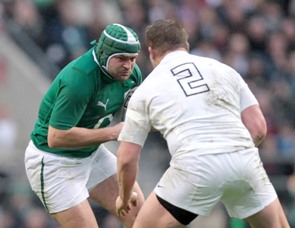 The autumn internationals may be behind us but a massive month of rugby lies ahead as the race for Lions selection continues to gather pace.

December’s Heineken Cup double headers will take on extra importance given what is on the horizon next summer, especially as Lions coach Warren Gatland intends to start penciling in his pre-tour selection thoughts sooner rather than later.

The European encounters offer a big chance for those players who missed the autumn Tests through injury to show Gatland exactly what they’re capable of on the closest stage to the international arena and a whole host of big names will hope to use the back-to-back continental clashes as a springboard to Lions selection.

Round 3 of Europe’s top club competition kicks off on Friday night when a quartet of top stars will be looking to impress at Franklin’s Gardens as Northampton face Ulster.

Potential Lions hookers Rory Best and Dylan Hartley missed the entire autumn campaigns for Ireland and England with respective neck and knee problems but both have now returned to action with their clubs and should go head-to-head this weekend.

Saints and England duo Ben Foden and Courtney Lawes should also start against the unbeaten Belfast-based province, with Foden having made his comeback from ankle ligament damage last Friday, a day before Lawes came off the bench against the All Blacks following a knee problem.

Ireland back rower Stephen Ferris doesn’t feature in Ulster’s squad for the trip to the East Midlands, though, as he faces an undetermined spell on the sidelines following ankle surgery.

Another major back row star forced to sit out Ireland’s November series is all set to return to the limelight from the start of the European action, however, as Sean O’Brien looks to reproduce his best form when Heineken Cup holders Leinster travel to Clermont Auvergne on Sunday.

O’Brien, who was named ERC European Player of the Year in 2011, was unavailable for both of his province’s opening Heineken Cup games against Exeter and the Scarlets and his country’s games three-game autumn series with a hip injury.

The double operation he required after Ireland’s summer tour of New Zealand led him to miss European fixtures for the first time in three seasons after he played in all 18 games in Leinster’s tournament winning campaigns in 2011 and 2012.

But his autumn absence hasn’t had much of an impact on his reputation, with feedback on our facebook page and in the national media showing that the 25-year-old remains one of the favourites for a Lions Test spot in the most competitive area of them all.

And it’s not just injury victims who, like O’Brien, will be seeking to live up to their growing reputations in these Heineken Cup games – there’s an increasing list of youngsters and former fringe players who stepped up to the Test scene last month who will want to show Gatland that their rise to prominence wasn’t just a flash in the pan.

Ulster’s Craig Gilroy certainly comes under that category having heard Gatland describe his performances against Fiji and Argentina as ‘outstanding’, while Scotland scrum-half Henry Pyrgos will be another newcomer looking to advance his chances when Glasgow host Castres tomorrow.

Mike McCarthy gets an immediate chance to show that he is worthy of being an Ireland regular after shining in place of Paul O’Connell as Connacht welcome French giants Biarritz to Galway and Tom Youngs will be keen to build on his first Test caps when Leicester face Treviso.

Owen Farrell could have the perfect chance to show that his superb display against New Zealand wasn’t a one off as his Saracens side travel to Thomond Park to face Munster on Saturday. The Irish giants might not be quite the European force they once were but Limerick remains one of the toughest venues to visit and Farrell and England backline colleagues Brad Barritt, Chris Ashton and Alex Goode will certainly face a far more intimidating atmosphere than the one that roared them home at Twickenham.

And what about those players who were fit to feature for their countries but didn’t get as much game time as they’d have liked in national colours?

Justin Tipuric, for example, played second fiddle to Sam Warburton when Wales faced New Zealand and Australia but there are few better battlegrounds to prove your worth than an away game with a Toulouse outfit who have been crowned Euro kings on four occasions and are likely to feature Yannick Nyanga, Thierry Dusautoir and Louis Picamoles in their back row.

With Gatland having spoken of the importance of out and out opensides Down Under next summer, the next couple of weeks clearly provide a decent chance for Tipuric to earn some brownie points heading into 2013.

But the same goes for every other player on these shores. While it’s true that no uncapped player has featured for the Lions since Will Greenwood in 1997, you don’t often get to represent your country without producing the goods in club colours.

Gatland knows the importance of what lies in store this weekend and next and you can rest assured that the players are equally aware of the potential long-term ramifications, even if it’s club success rather than Lions selection that’s at the forefront of their minds.