Mike Brown wants to play full back for England but will gladly continue to play on the wing if required. [more] 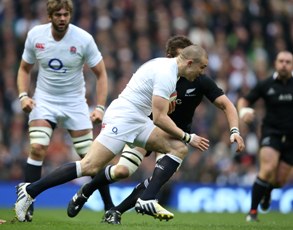 Mike Brown wants to play full back for England but will gladly continue to play on the wing if required.

The in-form No15 was superb for Aviva Premiership leaders Harlequins at Northampton on Saturday as he continues to push his claims for Lions selection next summer.

Brown was employed out wide by Stuart Lancaster in the autumn internationals against South Africa and New Zealand, with Saracens’ star Alex Goode starring at full back in the Twickenham Tests.

Quins boss Conor O’Shea insists Brown is no doubt as to where he wants to play, yet he insists he has no intention of rocking the boat in a seemingly happy England camp.

"He liked being back at full-back," said O’Shea, after Brown inspired Quins to an 18-9 triumph at Franklin’s Gardens.

"Browny wants to play full-back for England, but he will play anywhere for England, he would play at prop for England. He was outstanding for us today.

"I always tell him my selection would be different, but as long as he is playing for England he doesn't give a damn."

Both Brown and O’Shea spoke to Lancaster prior to last week’s 50-point thrashing of Zebre at The Stoop and it seems there is no danger of the player becoming disillusioned if he is employed out of position in the Six Nations opener against Scotland on February 2.

"Stuart came over to watch the team run and we sat down and had a chat," added O'Shea.

"It is a fabulous position for England to be in with Browny, Alex Goode and Ben Foden, they are pretty rich in that position. Lancaster wants to see players putting their hand up for selection."