Dan Biggar's superb kicking display inspired injury-hit Wales to a comeback 28-25 win over England that puts Warren Gatland's side in pole position in Pool A. [more] 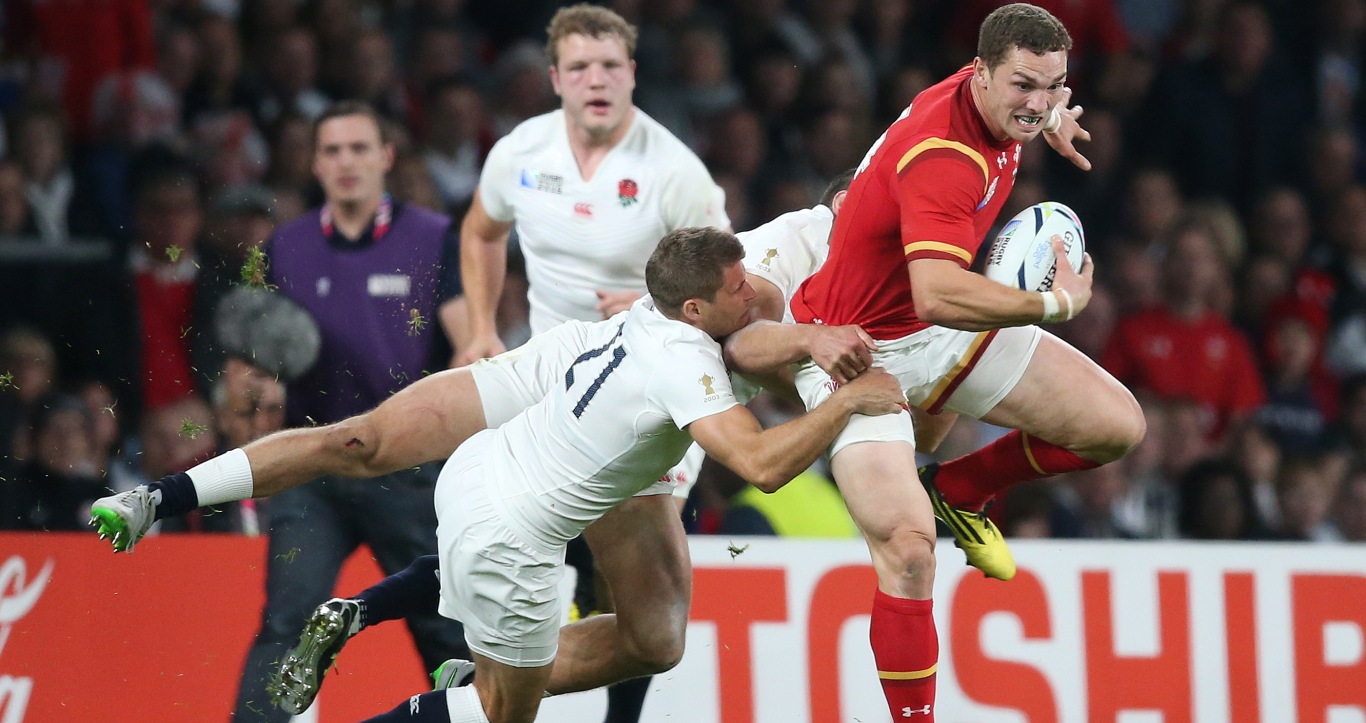 Dan Biggar’s superb kicking display inspired injury-hit Wales to a comeback 28-25 win over England that puts Warren Gatland’s side in pole position in Pool A.

Stuart Lancaster’s England side turned down a kickable penalty in the final moments that would have levelled up the game, opting instead to kick to the corner.

But Wales sacked the lineout and held on for a famous win that puts them on the verge of the quarter-finals.

That result had never looked likely when Jonny May crossed in the first half and British & Irish Lion Owen Farrell kicked England into a ten-point lead.

But the boot of Biggar kept Wales in touch before their fine comeback in the final quarter.

That fight back was made all the more remarkable considering injuries sustained in the second half to Scott Williams, Liam Williams and Hallam Amos that decimated an already threadbare backline.

But somehow they conjured a score for Davies to level the game up before the flawless Biggar slotted a penalty from halfway to put Wales in front.

And they held on in dramatic scenes but will be counting the cost of their walking wounded with only a five-day turnaround to Fiji.

For hosts England this result leaves their quarter-final hopes in real doubt with a crucial shootout with Australia coming next weekend at Twickenham.

After two years of build-up, the biggest game of the World Cup so far finally got underway and it was Wales who stormed out of the blocks.

Courtney Lawes conceded a penalty inside the first minute for collapsing a maul and Biggar – who in the absence of the injured Leigh Halfpenny took on the kicking duties – slotted the visitors into a 3-0 lead.

However it soon became clear that England had the upper hand in the scrum, indeed the first three scrums all yielded penalties for Lancaster’s side.

Dan Cole was getting the nudge on against his fellow British & Irish Lion Gethin Jenkins and the second of those penalties yielded England’s first points – Farrell levelling it up at 3-3.

Wales nearly had an immediate response when Biggar’s drop goal limped just wide but he soon made amends with a penalty to re-establish a three-point lead.

The Welsh scrum and lineout were struggling as the game entered the second quarter and a Farrell drop goal levelled things up after the impressive Ben Youngs had made a half break.

A 30-man scuffle then briefly halted proceedings as Mike Brown and Sam Warburton exchanged pleasantries but another scrum penalty from bang in front then saw Farrell move England in front for the first time.

And it soon got even better for the home side, a slick lineout move releasing Anthony Watson through the middle and when Ben Youngs sniped down the blindside May collected the pass to dive over for the game’s first try.

Farrell made no mistake with the conversion and England deservedly held a ten-point lead at 16-6.

With half-time approaching Wales needed something to spark them and Scott Williams duly provided it, the centre slicing through the heart of the English midfield and deep into the 22.

And when referee Jerome Garces pinged England Biggar slotted over to send the visitors in only trailing 16-9.
Farrell and Biggar exchanged penalties early on in the second half before England – with Joe Launchbury already on for the injured Lawes – then lost the effervescent Ben Youngs to a knock as well.

As the third quarter wore on both sides were far from their fluent best, Farrell’s fourth penalty re-establishing a ten-point lead before ill discipline allowed Biggar to peg them back again at 22-15.

And before the hour mark Biggar closed the gap once more and at 22-18 the tension in the Twickenham crowd was palpable.

Having been dominant for so long, England appeared to be clinging on.

Scott Williams was then stretchered off with what looked like a bad knee injury and Wales’ already threadbare backline was being stretched to breaking point, North coming into a makeshift midfield.

And when you thought it couldn’t get any worse for Warren Gatland he then lost both Liam Williams and Hallam Amos to injuries as the brutal collisions began to take their toll.

It was rotten luck for Wales who had fought back superbly in the second half but England were now on the front foot and Farrell again made no mistake with a penalty to make it a seven-point lead.

But you write off Wales at your peril and when it looked like England were going to see the game out – replacement scrum-half Lloyd Williams, playing out of position on the left wing, broke clear and chipped ahead for Davies who collected the bouncing ball to go over under the posts.

Biggar’s conversion levelled the game up and with only eight minutes remaining there was everything to play for.

Ill discipline at the breakdown was plaguing England and when they infringed again on halfway, Biggar punished them yet again to put Wales in front and on the verge of history.

But there was another twist to come, skipper Chris Robshaw opting not to let the flawless Farrell level the game up with a kickable penalty, instead going to the corner.

The lineout was nullified by Wales however, and they held on for a dramatic and deserved victory.