Munster extended their winning run to seven in a row in all competitions with a comprehensive victory over Leicester Tigers to take control of Pool 1 in the European Champions Cup. [more] 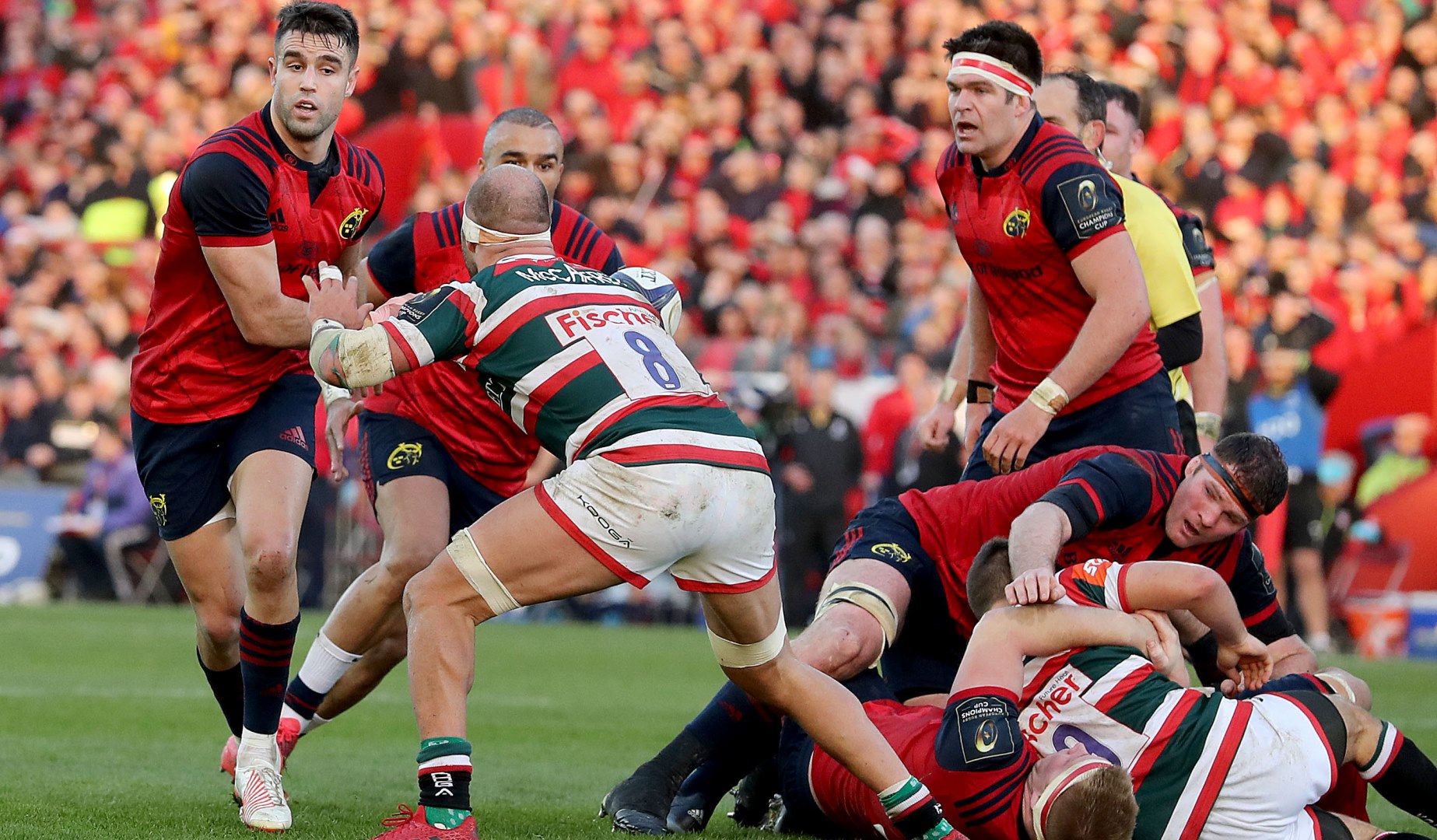 Munster extended their winning run to seven in a row in all competitions with a comprehensive victory over Leicester Tigers to take control of Pool 1 in the European Champions Cup.

Simon Zebo and Jaco Taute (2) and a late penalty try secured the bonus point for the home side who continue their unbeaten run since the tragic passing of Anthony Foley back in October.

They outmatched Leicester Tigers – who won at Thomond Park last year in Europe – in almost every area to claim a dominant 38-0 win.

The Munster pack dominated from the outset and Ireland back-row CJ Stander – so impressive for his country during the autumn – led from the front.

The No 8 racked up an incredible 15 carries for 62 metres and won a turnover in the first half alone.

His searing break put the Munstermen firmly on the front foot and the boot of Tyler Bleyendaal made their dominance count.

The Kiwi fly-half kicked four penalties to open up a 12-0 lead inside the first half an hour for the men in red.

Stander was not done there though, a second-half steal lifting the siege as Leicester Tigers enjoyed a rare period of dominance.

In all he got through a mountain of work, finishing the game with ten tackles – more than any other Munster player – 20 carries and the man of the match champagne.

The game’s first try was always going to be Munster’s and when it did come it was the in-form Conor Murray who provided it.

In a hotly-tipped match-up with England scrum-half Ben Youngs, it was Murray who provided the game’s real highlight.

After the forwards had picked and gone around the ruck to get them up to the try line, 2013 Lion Murray provided a superb no-look inside pass to his teammate Zebo.

Fellow 2013 Lion Zebo hit the ball at pace to burst over under the posts and Munster were 19-0 up at the break.

South African centre Jaco Taute has been a pivotal figure in Munster’s resurgence this season and his second-half double turned the screw still further.

The Stormers centre will return to South Africa later this month but he was at his bullocking best in the second half for Rassie Erasmus’ side.

First he crashed over on a short line after the rolling maul had taken them close and then he was on hand to dot down his second after fine work from Darren Sweetnam in the build-up.

And when Manu Tuilagi saw yellow Munster were home and hosed, securing the bonus point late on thanks to a penalty try and dealing the Tigers their heaviest ever European defeat.